Gröpa Naldas bɏer Sanya Suportenen Fötbal (English: Naldas Group of Senyan Football Supporters, often abbreviated to t Naldas or Naldas) are the largest group of organized supporters of the Senya national football team. They are one of two major football fan groups supporting the team, and are the largest ultras group on Micras with around 75,000 members.

Naldas was founded to support the Senyan national team upon Senya joining the FMF. Taking inspiration from fans of Tellia, fans began to adopt an ultras mentality and in the first couple of games fans brought drums, megaphones and took advantage of the standing areas of the Tiga national athletics stadium to replicate the actions of the Tellian ultras. However, as the team became more experienced, fans wanted to establish their own style, and the introduction of flares on the terraces became common place. Despite initial resistance from the authorities, Naldas members use of pyrotechnics to create an intimidating atmosphere quickly became popular, with the National Democratic Forum legalising the use of pyrotechnics at football matches in 2013.

The Naldas themselves became much more organised and in the same year reached an agreement with the Senyan FA to prioritise tickets for both home and away matches. They were subsequently recognised as one of four official supporter groups of the national team. 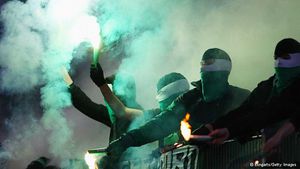 Naldas supporters during a World Cup qualifier against rivals North Antarctica in 2013. 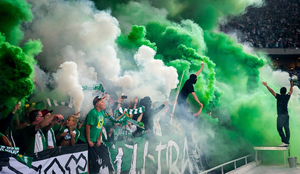 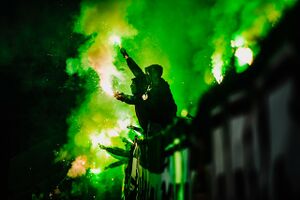 Naldas supporters setting off flares during a friendly against Tiana.

Naldas are considered some of the loudest, yet least aggressive, football supporters on Micras. During tournaments such as the World Cup qualifiers and the Copa Apollonia, the supporters are known to become very vocal on match days, and it is not unusual for fans to stand for the duration of games, although with the introduction of the 40,000 person safe-standing area at t Verte Val stand in The Snakepit, this has become more common. Naldas usually wear green "morphsuits", occasionally with the team's shirt over the top, continuously chant in Senyan, and let-off flares. A leader chanting over a PA system used to be available at Revolution Road, though this is no longer used. These fans can make football matches in Senya intimidating places to visit for visiting supporters. However, after matches, Naldas will be happy to socialise with opposing fans. Rival supporters are treated less hospitably, but even during rival matches there is usually little violence between the fans.

Rougly 75,000 are members of the Naldas, who are officially awarded 55,000 tickets for each game. Members who missed out on tickets to the previous home fixture are automatically prioritised for the next home fixture. Failure to attend ten consecutive home games or attend less than 5 out of 20 home fixtures will lead to automatic expulsion from the group. However, membership is free. Although both genders may join, the Naldas is over 80% male.

Because of the popularity of Naldas, entrance to the group is restricted by the group's leaders. To gain entry, one must be a Senyan national living in Senya who is aged 18 or above (though members can bring along up to two children aged 7 or above with prior agreement to games). One must also have no criminal conviction for class A or B crimes, subject to a footballing banning order, or been in prison in the past 18 months. Additionally, to apply, a member must have been to at least 10 Senya games (with one of the other supporter groups), and hold a pyro-license.

The Naldas, in conjunction with the Senyan National Police Force and FADESS mandate all supporters pass a pyrotechnical safety course. This course is one day long, and teaches fans how to use flares and other pyrotechnical devices safely. A pyro-license is issued upon passing the course and must be presented upon entrance to the stadium. The license is revoked if a person mishandles it or throws a lit pyrotechnical device either in the stadium or in the vicinity of the stadium.

Although it is rare, some people may be expelled from the Naldas. The reasons for this may be:

It has been debated to what extent some of these rules have been followed. For example, Naldas members have participated in fights with other foreign groups which have not resulted in sanctions, with some cases even having been encouraged by the group as a whole. Some ex-prisoners have been allowed to re-join the group after release, whilst some members who have moved abroad have also remained members, often times linking up with the group for away matches.

Naldas has been accused on multiple occasions of influencing government policy, especially relating to supporter rights. Some critics of the Senyan government have said that the Naldas hold an effective veto on government legislation. Several members of the National Democratic Forum are members of Naldas and have submitted bills that back Naldas positions. For example, the Naldas have succesfully lobbied for safe standing legislation, the unrestricted sale of pyrotechnics, changing policing operations, laws surrounding supporter rights, and decriminalising hooligan-related street fights. During the 2018 Copa Apollonia, Naldas successfully lobbied Prime Minister Ystëna Denisenka to call for criminally punish to members of the national team if they failed to advance from the group stage.

Whilst some observers have called Senya a "nation governed by hooligans", the government has introduced many laws restricting certain actions in football stadiums, including setting up non-ultras sections in stadiums and banning the supply of pyrotechnics to minors. In a survey in 2019, 63% of Senyans said that they felt that the Naldas influenced policy.

Naldas are officially classified as a Level 1 interest group, meaning they have to be involved in government hearings about football related issues and must be consulted prior to any change in laws relating to football or fan issues.

The Naldas liase with the other supporter groups of the national team, including the Komovoren, particuarly surrounding supporters issues and more extensive tifos and pyroshows. Naldas also liase with the ultras groups of club teams, due to a high number of members holding membership of club ultras too.

Internationally, Naldas have a brotherhood with Zeleni, the ultras group of the Kingdom of Coria's national team.