From MicrasWiki
(Redirected from Melusinian Faith)
Jump to navigationJump to search 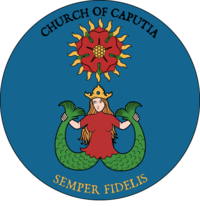 The logo of the Church of Caputia, featuring Melusine and the Rose and Sun of Zalae.

The Melusinian Faith is a polytheistic religious group based on the teachings and revelations of the Goddess Melusine and the life of her Prophetess Angelica Maria, who serves as the leader of the Church and the Archbishop of Zalae, and several other recognized Prophets. Its believers affirm the supremacy and cult of the Goddess Melusine as the sister and female counterpart of Bous. As such, the Melusinian faith is a sect of Bovinism, considered a sister church to the Dozan Bovic Church.

Its believers affirm that Melusine is the Supreme Goddess of Micras, "the cow to the Bull, Bous," who has ordained the nation of Caputia as Her Daughter through the Vision of Zalae. The Church of Caputia has played a prominent role in shaping the Caputian nation and its reconstruction. Its sacred book is the Libro Aquæ, which contains prayers, stories, and essential statements of belief. The start of the Melusinian faith can be traced to the city of Thaleia, Thalassa in Natopia.

Today, the Church of Caputia is the home of the Melusinian Faith, but it includes various efforts toward ecumenism. The theology and professions of faith, in addition to the Libro Aquæ, generally hold in common that Melusine was persecuted, suffered, escaped to Caputia, descended into hell, slew the Great Serpent, and rose from the dead to grant eternal life to those who believe in her and have made amends. They further maintain that Melusine reigns as the Goddess of Micras from a cavern under the city of Zalae.

The Church of Caputia was established by Royal Decree, when the people of Caputia began petitioning Queen Elizabeth I of Caputia to create a church worshiping Melusine, in fulfillment of the Vision of Zalae presented by Melusine to the people.