The Gerenian general election of 2017 was held on 15–16 July 2017 to elect a President and 10 Provincial Governors. In addition, East Gerenia and Gerenian South Keltia elected their representatives to the Parliament of Gerenia. The latter also elected their Governor.

Incumbent President Gerald Ruze announced in April 2017 that he would not run for another term. The leadership of the Independent Party then chose Mikkel Anerat as candidate. At the time of his designation, Anerat was the Minister of Education. In May he was promoted to the position of Chief of the Cabinet of Ministers, which has just been created.

It was the first time that coalitions were formed at national level. In the first day of campaign, the leaders of the Popular Party and the Socialist Party of Gerenia made public the formation of the DMEK (Peace and Liberty Front), with Arien Vasala as candidate. The Hope Party later joined the DMEK. A second coalition between the Reformist Party, the Nationalist Party and several other minor parties was formed, and called Cemîn Edres (Third Way). Their candidate was Arien Läters, of the Reformist Party. 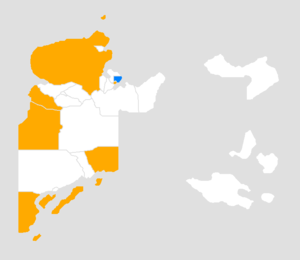 The Governors elected in 2017 were the following:

East Gerenia was allocated 1 seat at the National Assembly, and 3 at the Higher Assembly.

Gerenian South Keltia was allocated 3 seats at the National Assembly, and 1 seat at the Higher Assembly.