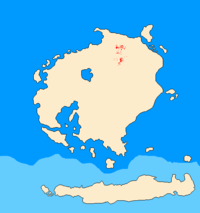 In red, the location of the Wood of the Gamesmen

Located in central, northern Corum, the Wood of the Gamesmen is one of Corum's several lesser wilderness areas. Though lacking in the biological diversity of Erlo Sinders Regional Forest, the Wood of the Gamesmen nevertheless plays an important role in the continent’s ecology. In particular, the forest is notably the home of top predators such as the Bijeko-Lisea-Nas. 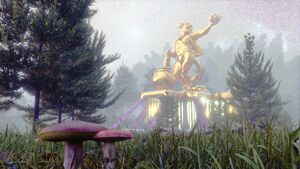 Pictured: A major haunt of the wild practitioners of the Stripping Path in Corum, the Wood of the Gamesmen is home to the Temple of the Satyr King, a Bassarid temple known for its 24 ft tall golden statue dedicated to Silenus, the king of the satyrs. The Temple itself is constructed around the entrance to the Tuñaos po Amaos, a complex network of caverns which leads to the northern reaches of the Corumian Underground. These Tuñaos - or Tunnels - can only be accessed from the main chamber of the Temple, and important secret rituals, sometimes led by Oracle of Braxia herself, are frequently held within them.

One of the most biologically diverse regions in Corum, Wood of the Gamesmen is home to at least nineteen noteworthy species, including, but not limited to the following.