The team was founded in 2013 after Tyrenia, which had existed on Micras since earlier in the year, applied successfully for FMF membership. Tyrenia left Micras later in the year as part of The Dominion's death.

Tyrenia returned to Micras as a constituent nation of Jingdao in early 2016. The team's first qualifiers saw them finish bottom of their four-team group with just one point to their name. Later in the year, Tyrenia became an autonomous territory of Jexit following its independence from Jingdao. Shortly afterwards, the team competed in the 2016 Emerging Nations Cup; winning their quarter-final and semi-final, but losing the final to Nessus. Tyrenia was once again annexed by Jingdao later in 2016 before being dissolved, with the national team being integrated into Jingdao's. 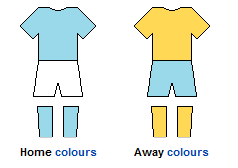 Tyrenia used the following flags during both of its FMF affiliations: