From MicrasWiki
(Redirected from Jexit)
Jump to navigationJump to search 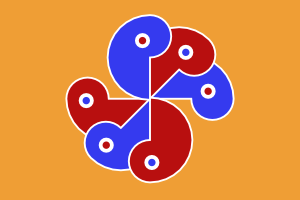 Flag of the Jexit Kingdom.

The Jexit Kingdom, or Geming Kingdom (Revolutionary Kingdom), was a a kingdom established with not only a ceremonial monarchy, but a government which itself was mostly ceremonial. It existed between 1637 and 1641 AN and de jure reigned over the whole Jingdaoese Empire between 1637 and 1640 AN. Prime Minister David Boghead could do very little but administer a small part of the capital. It not only failed to properly unite the Empire after the disappearance of the Danya Emperor, which led to the Geming War, but it also refused to lay down its weapons when the Tegong restored a member of the Great Jing Dynasty: the Sheng Emperor. Therefore, the historians and Court dismissed the Kingdom as a rebel empire, with a weak administration.

Loyalists soon started to move against the Kingdom and the Geming War ended with a victory of the Empire.