From MicrasWiki
(Redirected from Plaid Calbinol)
Jump to navigationJump to search 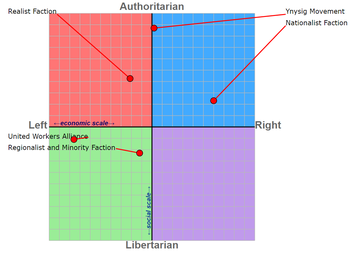 Positions of the various factions on the political compass

Calbain politics are characterised by entrenched factionalism. These factions date since the establishment of the modern Calbain state in 1597. Political factions have been subject to two major re-alignments. The first occured in the late 1640s, when the institutional collapse of the Calbain government, and the exile of many prominent Calbain leaders caused a shift in political position. This saw the leadership of the nationalist party, the Plaid Calbinol, to advance Liberal values and de facto merging with the Liberal party. This group became the later nationalist faction. In return, some conservative members of Plaid Calbinol, together with the Catologian Political Party and the large majority of the Labour party, formed a conservative movement. This movement resulted in the formation of the Realist faction. Following the resignation of the Drakeford government, another smaller re-alignment took place which saw the more conservative members of the nationalist faction throw their support behind the realists, which subsequently won the 1688 elections in a landslide. Aside from these two main current in Calbain politics, a third faction exists which champions regionalist and minority interests.

The Nationalist movement is, since the establishment of Calbion, been the most dominant political current in Calbion. Under the leadership of Llywelyn Lewis, nationalist policies shaped the political system of the country. The nationalists were highly pro-independence anti-Jingdaoese. They advanced an aggressive foreign policy, causing friction with neighbouring Natopia. In addition, the nationalist faction champions democratic institutions, national suffrage and moderate liberalisations. The party is also strongly in favour of free trade. Especially since the 1940s, the nationalist faction presents itself as a liberal and modern party. Since 1696, the nationalist regained the government with Cadwaladr Bevan-Hall becoming Governor-General.

The Realist faction arose from a political conservative movement that included Catologians, Social-Democrats and conservative nationalists. The realist faction recognised the relative weakness of the Calbain nation, and advocated strongly for autonomy within larger states, notably the Brettish, but also the Jingdaoese. Three waves of realist government existed, first during the South Batavian era, then during the Brettish era, and finally during the Arcadian era. During the Brettish era, the prominent nationalist Governor-General Lewis led a realist government. Under Arcadian occupation, the realists made up the large majority of the parliament. The strongly traditional values of the Arcadian occupiers was appreciated by the realists, and created a basis for some of Calbion's highly conservative policies that remain today. Following renewed independence, the realist faction abandoned its stance against independence, and focussed on traditional values, as well as international isolationism. After 1688, Richard ab Ioan leads the country as the first realist Governor-General under a period of independence. His government saw increased Westward expansion. The Realist government collapsed after its involvement in the Second Elwynnese Civil War sparked national outrage.

The seizeable non-Calbain population in the South of the Ynys y Calbain is mostly of Maraguan descent. Following the establishment of the Calbain state, the Maraguans fought for autonomy and were by en large against the formation of the Calbain state. Following the Calbain Independence War which resulted in mass retaliation, the Maraguans formed a rump state that claimed the whole island. This attempt was highly unsuccessful. The democratic reforms of the 1620s allowed the minority groups to organise themselves. Hendrik Maritz founded the Maraguan Party which managed to gain several seats in the Cynulliad Cenedlaethol. For the next election, the party became a home for smaller minority groups such as Nelagans, and was rebranded as the Minority Bloc. The faction has continuously championed the rights of minorities, and has opposed Calbain nationalism. Following the expansion of the 1680s, the Minority Faction also fights for the right of ethnic Shirithians and Brettish.

Literally the "island movement", the Ynysig Movement is a nationalist and isolationist political movement formed by supporters of former Governor-General Evyn Drakeford who left the nationalist faction following the expansion of Calbion to the West. Opponents of this plan feared that the rapid expansion would cost the nationalist faction votes (which incidentally, they were right about) and that the "cultural sanctity" would come under threat. The Ynysig movement officially supported the realist faction in the 1688 elections, but withdrew its support after the announcement of the policy of Agoriad and the opening of relations with other countries on Micras. Currently the Ynysig movement has no seats in the Cynulliad Cenedlaethol, although there are several realist members that have informal ties to the faction.

The more radical social democratic branch of Plaid Lafur continued socialist politics even after most of its members had joined the realist faction. The labour party is very much connected to the Labour Unions, and has some local representation but no seats in the Cynulliad Cenedlaethol. The United Workers Alliance is also the largest Labour Union in Calbion. After the Realist government sought to put the union under government control, Labour organiser Hugh ab Morgan announced that the UWA would contest at least 25 seats in urban and industrial parts of the country.