The Nelaga Territories was a micronation that is the spiritual successor of the Flying Islands of Jasonia, an old Apollo nation that was active in 2000 and 2001. It became defunct in december 2012. 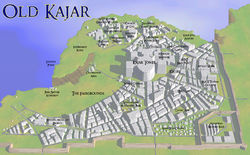 The idea of creating a FIoJ successor state had been one that has been hovering around almost since the nation's fall seven years prior. Many micronationalists expressed an interest and desire in participating in such a project. However, the gruesome failures of previous attempts at a successor state, particularly the 7th Republic of Audentior, made Harvey, the FIoJ's original founder, very wary of such a project under the premise that it was better to die a legend than be reborn a failure.

Harvey spent many years away from the hobby between 2001 and 2008. However, the hobby never quite forgot about Jasonia. The ever-popular micronational RPG "Control of Destiny 2" that so prominently featured the FIoJ was discovered by later micronationalists, keeping the memory alive, and good treatment of ancient FIoJ ruined cities such as Jasonia Palace and Kajar by later powers occupying the Jasonian Archipelago such as the Republic of Aerlig and Zindaria spoke of respect for the fallen sky kingdom.

Word of Novatainia cooperating with Zindaria to excavate some of the key sites in the Archipelago eventually reached Harvey, and he wrote up several "clues" to help their roleplaying adventuring expeditions, in the process becoming interested in micronationalism again as well as being amused by the remembrance of Jasonia's legacy. But the thing that pushed him over the edge and back into the hobby at large was seeing Maraguo as a semi-autonomous country with the long-dead city of Enhasa rebuilt and a version of Jasonia's historic flag flying proudly. 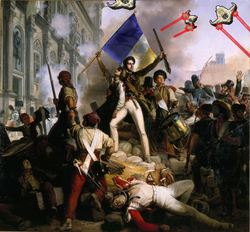 In late November, Harvey met with Bill Dusch and Scott Alexander, and the three agreed to a plan to revive Jasonia as the "spiritual successor" state of the Nelaga Territories. This group eventually extended to the Novatainians Andreas the Wise, Nicholas the Mad, and the Demon of Fides as well as the Batavian Jonas Windsor, representing the two major countries that controlled the Archipelago's territory that would become the new nation, as well as long-time Apollo and FIoJ veteran Gman Russell. Together, the team prepared a forum, hammered out a constitution, established some basic laws, and laid the footwork for the major recwar, the "Day of the Eagle", also known as the "Jasonian War" that publicly announced the nation's existence as well as provided a month or so of recwar combat. The actual recwar wasn't all that great, but Harvey got to recwar a freaking Omen-class Gravship, Jasonia's legendary "FIoJ Fist", so he's not complaining.

On December 23rd, 2008, which is not-coicidentally also Harvey's birthday, the Nelaga Territories revealed itself to the world and the government officially went into effect, making this the nation's birthdate despite the informal gathering a month prior.

Since its foundation, the Nelaga Territories have been rather low-key, not participating in much of the internal scene save being a member of the Small Commonwealth and having Harvey serve as its Secondus for a period. Nelaga applied to the MCS two months to the day after their birthday and officially were added to the map in version 13.7.8 on Feb 14, 2009.

The low-energy vibe of the nation has caused many to occasionally (mistakenly) believe it has succumbed to abandonment, and at one point a President was actually impeached for general inactivity, but the country live don. 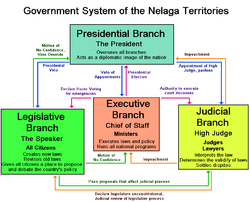 The legislature of Nelaga is a Meritocracy-based Timed Democracy. The meritocracy is a rather new institution, designed to reward active, hard working citizens as well as non-citizens with "merit points" that can be cashed in for permanent additions to a person's vote count. Merits are calculated monthly, with various categories to reward contributing to the nation. This makes Nelaga one of the few micronations that actually allows non-citizens to vote, though they need to earn at least 10 merits to be able to do so and, to date, no non-citizens have taken advantage of it.

Nelagan legislature is officially a democratic voting system. Unofficially, however, many citizens make use of the "Government Workshop" to discuss ideas for laws before proposing them for a vote. If opposition occurs during a vote, it is very likely and common that the sponsor of the bill will withdraw it, making adjustments and amendments if the opposition was minor or returning it to the Government Workshop for major revision and discussion if opposition is significant. Because of this process, the actual votes themselves are almost always uneventful, with all the details having been worked out before major voting begins, and it is very common for bills to pass with all citizens voting unanimously in favor.

Nelaga's culture is largely based around impossible science and technology, with most of the major focus on an antigravity-based technology they call "gravitronics." This "science" is the basis of what, according to them, allows the Archipelago to hover in midair, and is used in many of their scifi-esque vehicle and weapon designs such as the [Star Nebula] fighter, a fighter used in one of Shireroth's civil wars to destroy orbiting space weaponry. The major Nelagan cultural institution is JASO, the Jasonian Aeronautics and Space Organization, a R&D group developed by Erik Mortis and others during Jasonia's lifetime, seized by Shireroth in the fall of 2000, miraculously remaining intact all this time (admittedly more than a little ignored) until purchased from Shireroth by Nelaga in July of 2009. 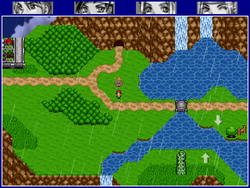 A screenshot of Control of Destiny 2, showing Nelaga island outside of Kajar (CoD2 by Harvey Lekuan)

Nelagans also enjoy video games, specifically RPGs, and it is the current location of the BGI Game HQ, a forum where Harvey and other debate video game creation. It is here that Control of Destiny 2 is discussed and new screenshots are shown, over ten years after its original conception!

Another major Nelagan focus is on micronatonal history on the large scale. Nelaga believes and accepts most any claim another micronation makes is valid, such as when its allies at Gralus they say they are a magical-based country. The only international claims they flatly oppose are ones that interfere with Nelaga-based lifestyle, such as statements that the islands cannot and do not fly.

Nelaga is also sort-of the home of the Soloralism religion, a faith based largely on the canon history of the Control of Destiny games. However, as of to date, the country has no major religious institutions, and is banned from having a state religion by their Bill of Rights.

On the whole, Nelaga does not take itself amazingly seriously and has a fairly laid back, casual, atmosphere that more promotes random weird discussions rather than cutthroat politics.

Nelaga also has an alliance with Batavia; unfortunately, the language gap between the two countries makes meaningful relations difficult.

A strong mutual respect with Natopia has lead to the two countries agreeing to share joint control of the island of Ptia, a major Soloralist religious site and a place of major importance to both nations.

Though Nelaga has no official relations with Interland, the fact that Interland agreed to turn over their northern half of Maraguo island to Nelaga (save Edwardsbane an the surrounding territories) gives Nelaga at least a respectful attitude towards them.

Nelaga also has no official relations with Shireroth and often disagrees with them on political issues, but the mutual history and closeness of the two countries, not to mention a wide overlap of citizens, keeps the two countries within each other's general spheres of influence.

Following the fall of Nelaga, the Aeronesian Archipelago was taken over by the independence movement of the Calbain people, resulting in the establishment of Calbion in 1596 AN (2012). Calbion expanded its territory and continues to occupy the Archipelago to this day.