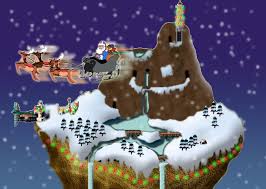 Micrasanta, occasionally stylised as MicraSanta, is a legendary character on the planet of Micras and among its community. Created in November 2007 by micronationalist Dr-Spangle to appear on an MCS-themed advent calendar, Micrasanta acts as the planet's equivalent of Santa Claus and has become a popular character that appears around Christmas each year.

Some minor folklore surrounds Micrasanta. He is said to reside on the flying island of Airosamente, regardless of current political claims, from which he delivers presents on Christmas Eve. Micrasanta is frequently depicted as wearing a suit made of blue and red material. This is a parody of the urban legend of Santa Claus' red suit being based on the brand colours of Coca-Cola, as Micrasanta's suit matches the colours of rival drinks company Pepsi, as suggested by Craitman during the character's formation. However, he also shares a number of other features with Santa Claus; chiefly that he delivers presents via a flying reindeer-drawn sleigh, and judges children's behaviour to determine which ones are deserving of receiving them.

In parts of central Benacia, Micrasanta of the blue-and-red-clad sleigh-flying variety is considered to be little more than the imperfectly-replicated archonic simulacrum of a regional undead pseudodeity known as Lord Toastypops, whose wintertide judgement of mortals through the proffering of confected gifts and corpse wax has become central to the cultural tradition of Minarboria and its rump of successor states. The latter's creed of uncompromising jollity, however, serves to limit any direct rancour between the two entities and their respective followers.

An urban legend of the era maintained that the Babkhan high command would activate its air defences on Christmas Eve as a precaution against unauthorised violations of its airspace by a person or persons unknown suspected of dispensing presents to caste-shammed children without the sanction of higher authorities. In spite of these efforts, so the legend goes, the Emir of Raspur would invariably wake the next morning to find a lump of coal waiting for him in his slippers.

Another legend goes that on Christmas Eve, a Palesmenian general ordered his soldiers to begin firing their rifles and anti-aircraft weapons into the sky upon seeing a flying object, believing it to be a "gift-giving heathen". This purportedly turned out to be a civilian craft coming home after a day of recreational flight. Upon landing, the pilot got out of the plane, mumbled something while looking up at the sky, and left. The next morning, the general woke to find his nightstand and bed covered in a thin layer of coal dust.