King's Lynn Town FC (often referred to as KLT) is a football club from King's Lynn, Lamantia. Despite being from Lamantia, the club participates in the Senyan League. The club is famed for being as somewhat of a "cult team", given their small town home and small stadium. The side have punched way above their weight over their history, including winning three straight promotions in their first three years of existence, and now regularly contending for both domestic and continental titles, 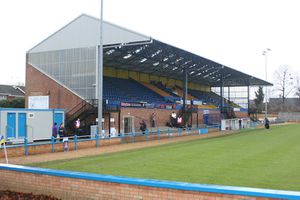 King's Lynn Town were established in 2012 and made their debut season in the Senyan Conference, shortly after Fort Kolgrad was annexed by Senya. Despite playing out of the small town of King's Lynn on the Colgrad peninsula and playing their games in the modest Walks Stadium, Lynn have become the dominant force at club level in Lamantia, climbing up the football ladder in Senya quickly. After defeating Micras Rock on penalties to win the 2012–13 Senyan Conference, the club secured two further successive promotions by winning the 2013–14 Senyan Third League and defeating Svorgas FC 3–2 on aggregate in the play-offs the following season to gain promotion to the top flight of Senyan football, where they have remained since.

Due to their status as Lamantia's only top level club, the side have regularly appeared in AEFA competitions, with the side finishing runners-up in the 2015–16 AEFA Cup after losing 4–2 to Gerenian side KPSK Isherwood in the final.