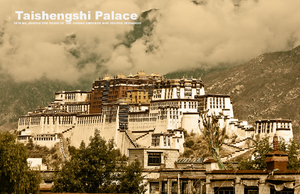 Taishengshi Palace dominates the city of Taishensghi and acts as an important assembly place for thousands of monks.

Xianxia is a province in Jingdao. It was known for its wild and untameable nature and its several re-education camps, but transformed into a centre of religious activity after the Mingshi Emperor's appointment of the First Seishinso as Viceroy in 1646 AN.

From penal colony to religious strongholds

Its home to two important groups of people: one being the descendants of prisoners, who were sent to re-education camps in its vast wilderness since the early days of the reign of the Danya Emperor (1637 AN), and the followers of the Seishin Order. The last one received can count on a large amount of goodwill among the Jingdaoese civil and military authorities. The order, which was established with the blessing of the Mingshi Emperor, and still follows several of His teachings, grew in numbers and influence throughout the 17th century. The group, guided by a seishinso, who acts as spiritual leader had even sought the support of the Heavenly Court on several occasions to "spiritually and politically guide the province and its inhabitants in the absence of the Heavenly Light Himself".

The monks of Seishin live in the abbeys, which are spread across Xianxia. Most important towns, and every city, has a monastery, which are in charge of huge chunks of land. The local economy is therefore reliant on the goodwill of the religious order. Its inhabitants are not only seen as the most faithful worshippers of the Tianchaodao, but believe that the Heavenly Light has granted the monks the spiritual power to interact with the lesser spirits which dwell the mountain ranges, forests and swamps.

The Xianxia Province is governed by a Viceroy, appointed by the Heavenly Light. While the position of Viceroy is de jure open to anyone, traditionally the reincarnation of the Seishinso is appointed. A commission of monks assemble after the death of the last Seishinso and act as a regency council during that period. They become responsible for educating the reborn Seishinso and have the duty to destroy any information of his former family: his or her name - if already granted - is erased from official documents, while family has to swear a holy oath to never talk about the Seishinso as a normal child.

Once on the age of twelve, the Seishinso receives the right to rule: a request to transfer authority is sent to the Heavenly Light. Several rites are afterwards performed to formally establish his rule. 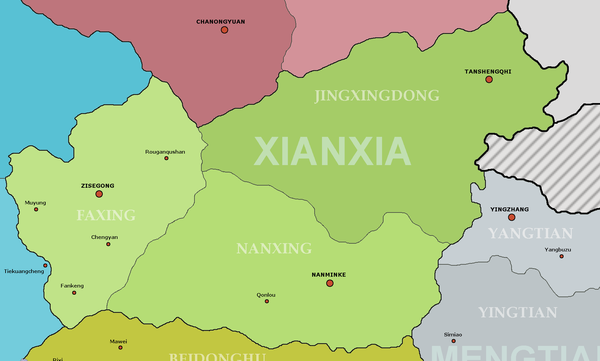 A detailed map of the province and its districts.
Retrieved from "https://micras.org/wiki/index.php?title=Xianxia&oldid=144429"
Categories: