The Republic of Jezeraah (also known as ROJ) was an island country located at the confluence of the Maccabi River and Lake Morovia.

The main ethnic groups in the Republic were the Jezeri and the Israati.

The capital was Jezeraah City.

Jezeraah means "island" in the local dialect, which was derived from a combination of Israati and Babki (essentially a stylized Arabic).

Originally established with other communities by settlers that formed the early Free State of Haifa, the island was populated by Babki immigrants fleeing Eura. A large number of immigrants also arrived from Afrikaana, helping to further bolster the population. The island came into conflict with Israati hardliners influenced by Pallisican and Bassarid imperialists. The left-leaning island government favored a more democratic government in Haifa, while hardliners pushed for a more nationalist government. After rigged victories by the hardliners many Jezerans fled north to Elijah's Rest in Natopia, only to return after the collapse of Caputia offered a renewed chance at a free Jezeraah. Currently the country was embroiled in the Haifan Civil War and was fighting the Haifo-Pallisican Imperial Trade Union, which also claims the island.

The Republic of Jezeraah was a republic with an elected President and a parliamentary Legislative Council headed by a Prime Minister. 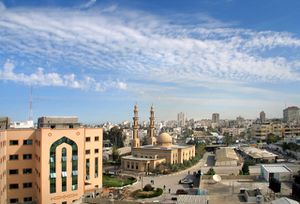 Located at the confluence of Lake Morovia and the Maccabi River, Jezeraah consists of two small islands. The larger island was known as the synonymous Jezeraah, while the smaller island was known as Lazawi (Lazuli/Blue Island). The islands have a small land area but were very densely populated and highly developed. Very little arable land remains, and most of this was located on Lazawi. As such most food products were farmed from aquatic sources, such as fish, shellfish, and rice. At around 40 degrees the area boasts a warm climate with cool but not cold winters. The elevation was relatively low due to it being in a river valley, with the highest peak reaching only 350 meters above sea level.

Jezeraah Island has one major city, Jezeraah City. Several smaller suburbs populate the western reaches of the island. Lazawi has one small city, Azula, located along the northern coast.

The country has a total population of 447,296 citizens.

The following was the ethnic breakdown of the country, according to the 2018 census:

The culture of Jezeraah was distinct from much of the surrounding Haifan communities in that it was influenced from very early on by Babki settlers from Eura. As such, the island's architecture and traditions were either derived or bear resemblance to those already established in some of the now-extinct nations of Eura such as Babkha.

Most Jezerans were communicants of the Temple of Keiphah, which began as an offshoot of the worship of Zartosht, a religious sect brought over from Eura. The Keiphah Faith was a religion teaching the essential worth of all religions, and the unity and equality of all people. Three principles were central to these teachings: the unity of God, the unity of religion, and the unity of humanity. God periodically reveals his will through divine messengers, whose purpose was to transform the character of humankind and to develop, within those who respond, moral and spiritual qualities. Religion was thus seen as orderly, unified, and progressive from age to age.

Jezeraah has a small economy that was hampered by high-density population and limited access to resources. This has been further impaired by the Haifan Civil War. Lazawi produces the greatest majority (over seventy percent) of Jezeraah's agricultural products, which include citrus, olives and vegetables. The cut flower industry was also growing and may pass food products as a major export within the next decade or so. Other major exports include fish products (including shellfish), olive-wood carvings, textiles, and mother-of-pearl. A limited amount of oil has been found offshore.

One major boon to the economy has been the Maccabi Hydroelectric Facility which sits south of Jezeraah on the Maccabi River. It consists of the Maccabi Dam and helps retain water in the natural basin that forms Lake Morovia. The project consists of the dam with 30 turbines producing an estimated 6,000 MW of power. The western end of the dam was connected to several locks that allow ships to pass up and down the river. The facility produces a large amount of power that was then sold to nearby communities, generating a significant profit for the island yet also monopolizing the economy. Since the start of the civil war and the collapse of Caputia control of the dam has become tenuous and Jezeri forces retain a large contingent of soldiers there to protect it from attacks. Its importance to communities within the Morovian Watershed, on both sides of the conflict, have helped keep it from becoming a war target.

The Jezeran military consists of the Jezeraah National Security Forces. This was further divided into four branches; army, navy, air force and intelligence.

At present the JNSF consists of around 30,000 personnel. The division was as follows: