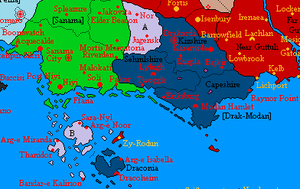 All residents in the Straight Protection Zones were excluded from new laws regarding state-enforced heterophobia. Heterosexual residents were guaranteed free and safe passage to the SPZ.

Zones A and B

The creation of Zones A and B was necessitated due to the sudden and severe international condemnation of Drak-Modani policies in enacting Draconian Supremacy. Zone A (Shimmerspring) was already experiencing rising insurgency, and the Drak-Modani Defense Force withdrawing further plunged the area into chaos on the weeks leading up to the plebiscite. The first Kinsey testing site and conversion camp was established in Jugensk for the transitional month when Drak-Modan still had nominal control over the area. Zone B was selected as a secondary SPZ after the Massacre at Loki's Inn caused a large migration of heterosexuals fleeing the island of Draconia.

As of 1691 these areas are now fully under the jurisdiction and sovereignty of Sanama.

To alleviate the concerns of allies, the government of Drak-Modan created smaller zones in each demesne in 1691. The central government mandated each demesne reserve at least 10 square miles of land where heterosexual citizens of Drak-Modan may migrate to and live peacefully and unjudged. A further requirement was that each SPZ be drawn into its own constituency in The Fury to allow four token heterosexuals in the legislature. The demesne governments usually also place a Conversion Center near these settlements. The residents of these Zones retain full Drak-Modani citizenship, are counted in the census, can establish Zone Councils to govern themselves, and vote in Fury elections in their respective constituencies.

The Straight Protection Zone in Kizshire is located in idyllic, untouched countryside in the south of the demesne. It is populated by 1,980 citizens of Kizshire who insist upon their heterosexuality. Locals refer to the zone as "AXE Town" because of the overwhelming use of AXE body spray which sometimes causes a haze to fall over the settlement. The settlement is nestled in the popular tourist destination known as Bajkir Valley. The duke of Kizshire personally chose the location of the town so that the straight residents could support themselves by relying on tourists, just as he and his Draconian sex working ancestors did. Unofficially, the town has effectively become an ethnological exposition used to display the sub-human and primitive nature of heterosexuals.

The women of the town support themselves with traditional straight handicrafts for tourists, including hand-painting oversized wine glasses with straight aphorisms like: "Live, Laugh, Love;" "It's Wine O'Clock;" and "This is My One Glass a Day." The men of the town avoid their families at the one sports bar in town during the day and try to support their families by playing internet poker at night.

Nearly 6,091 straight residents have relocated to or remained in the SPZ in Capeshire, which is northeast of Modan Hamlet. The zone's borders were drawn around an existing ancient Modan-Laqi town, Chiihab, which is home to a factory now belonging to CapeCoGroup, a large conglomerate that mainly produces small household appliances for export. The ducal government of Capeshire has a more economic outlook on its treatment of heterosexuals. It wanted to ensure they would be productive and not be a drain on demesne resources. Thus, it has a seemingly humane straight toleration policy and provides relocation assistance, hence a large population in its SPZ. The demographers of Capeshire also indicated that Chiihab had a higher-than-average population of reticent heterosexuals, and that the appliance factory inside the SPZ would provide enough economic stimulus to keep the SPZ mostly self-sufficient. Almost all public relations material touting the treatment of heterosexual Drak-Modani residents is produced here.

The SPZ settlement in Sehmlshire is located in the remote, far eastern portion of the demesne. About 301 straight residents live here. The land for the settlement were old donkey ranches and it is surrounded on all sides by other donkey ranches with only a single dirt road linking the town to the outside world. The dirt road is impassable after heavy rains. The stench is unbearable. As Sehmlshire already had a lower population and its proximity to Zone A allowed for many residents to flee, the population of Donkeyburg is low. It is unclear how long people will stay in the stinky town, although many determined heterosexuals are committed to staying there out of spite and drawing welfare checks for as long as the Drak-Modani government will write them.

With such a low population and even less heterosexuals to care for, the Assembly of Landed Gentry of Sehmlshire refused to give-up any valuable land. It was eventually decided that the ducal government would purchase the 10 square miles from several adjacent donkey ranches in the poorest region of the duchy. The Assembly has authorized a monthly UBI of ₦100 for residents of Donkeyburg. The Assembly has also set aside funds to pay for all relocation expenses of Donkeyburg residents to areas outside of Drak-Modan.

The (in)famously heterophobic demesne of Draconia took advantage of the ambiguity of the text of the mandate to create the SPZ and set aside their south-eastern most island as an SPZ. The island was unpopulated and unnamed at the time of designation however it has sometimes been referred to as Inbound Island by Drak-Modani navigators. About two dozen citizens chose to relocate to the island and establish a community. Demographers warned the settlers of the "Inbound inbreeding effect" that will occur in a few generations due to the lack of initial genetic diversity. The new residents of Inbound Island ignored the concerns and chose to settle there anyway.