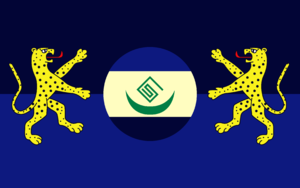 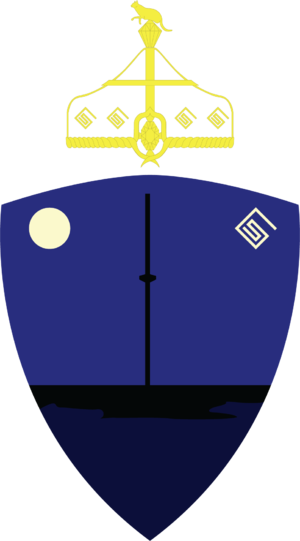 Coat of arms of the city

Mesior or Meszor (in Præta) is a city in the north part of the Elwynn River on the east bank of the river. Currently located in the Guttuli Protectorate, it has historically been part of Shireroth's Duchy of Goldshire.

It was considered the sole city of any consequence in the county of Lunaris - the remainder of the settlements being towns little more than hamlets, Teldrin not withstanding, or glorified rustic asylums where the worst congenital defectives of eastern Benacia have, over a period of centuries, been deposited with sadly irreversible consequences for the culture and gene pool of the county whose denizens rejoice under the decidedly appropriate appellation of Lunatic. 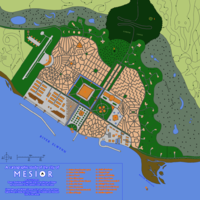 
An account of Mejor by Aryeztur Mejorkhor in 3737 ASC reads, "The city's population quickly grew. It was initially settled by Lunatics native to the region and other peoples from the Barony with a sprinkling of people from all over the Duchy. Then an extremely large contingent of settlers from Aryez arrived with the new Baron- around 100,000 people. These people, the Aryezis in Khorze began to call themselves the Khorzeans. A mixture of their Aryezi and local dialects developed into the lingua franca of the city, Mejori Aryezi. The city tried very hard to incorporate numerous cultures and becoming cosmopolitan. For example, the new flag of the Barony and the city contains a moon. This is to honor the Lunatic heritage of the region.

Other groups of people from all over Shireroth settled the city. Some came for the adventure. Some came for the money. Many converts to Arya drifted there. Others came to start a new life or improve themselves. Many philosophers, poets, and scholars found their way into the city due to the Baron's promise of generous funds for cultural centers and libraries. Within 3 years, the city had remarkable grown to a population of 300,000 people and was developing the infrastructure to becoming a major port and center of culture.

Already the philosophers have gotten to work. The Philosopher Zorda had the following insight: there are three ultimate beings in the world. The God of Good. The God of Evil. The Goddess of Nature. The Goddess of Nature holds Good and Evil in balance, thus the veneration of nature is necessary. It is thought that this philosophy was influenced by the native traditions of the region."

Departure point for Neridia colonists
Emberbark??
Rivalry with Teldrin
Liberated by the Army of the Golden Dawn in the year [insert date when it happens]
Reoccupation by Imperial Forces in 1643.

Features of the City

Directly controlled by the Royal Government rather than the county authorities, the Keyhole Dockyard is home to the 11th Patrol Squadron, comprised of 20 Protector Class Corvettes, the 12th Submarine Squadron and the 18th Naval Flight, which together formed the 5th Flotilla of the Maritime Division of the Goldshire Regulars.

Following the destruction of the 11th Patrol Squadron during the Civil War in Goldshire, the Keyhole Dockyard became a major garrison for the Imperial Navy Cadet Force and the Coastal Command.

Developed on the site of the ancient Smotritca Docks (Old Town). Headquartered in these containerised docks, adjacent to the Keyhole Dockyard, is the Ducal Merchant Fleet - a chartered body that maintains a fleet of merchant ships for the purposes of promoting trade and transporting government personnel and assets. Serves as a logistical auxiliary to Goldshirian naval units. Runs Goldshire's major maritime passenger routes:

A surprisingly sensible and well maintained airport with a good reputation for punctuality and baggage handling. Staffed by Zombots.

The broad thoroughfare, noted for its poplar tree street walks and popular streetwalkers, that separates the port districts from the main city. Home to Randy's Vivid Whorehouse, named after a certain Randy Viviantius, former commander of the submarine Alnientor in the Goldshire Regulars. After he was quietly cashiered for acts tantamount to piracy in Eastern Cimmerian Waters, Randy turned his hand to running the sorts of venue he had so commonly frequented during his long and mostly distinguished career. It turned out that he was so successful in this that he put most of his competition along the notorious Gropecuntestraße out of business. Taking advantage of his competitors straightened circumstances to buy the abandoned properties for a song, Randy went on to create the largest den of iniquity in eastern Benacia since the Church of Elwynn was forced out of the sacred prostitution racket.

Fortress of the Tyrant

The Zemlyan Vodka distillery is notorious for the blindness and insanity routinely occasioned by the consumption of its post-soviet produce by the unwary.

The Distillery's Research and Development office works on finding the lost lemon, and mixed fruit varieties from the ancient Novaya Zemlyan recipes on which these vodkas are based. In Elwynnese industrial circles krepkaya is widely admired for its utility as a paint stripper and cleaning agent. Some hardier souls, usually mariners, are even known to drink it of their own volition. The explanation commonly given is that it is amongst the few known substances that are sufficiently noxious to cause a Kraken to regurgitate its prey.

Known affectionately as the Lotus Bud, the Mesior Repertory is composed of 27 free-standing marble-clad "petals" arranged in clusters of three to form nine sides with nine doors opening onto a central concert hall with a capacity of 2,679 seats. Once home to the largest playing organ in the world, with over 10,000 pipes. The organ was removed for an experiment where, distressingly, the pipes were connected to a Katzenklavier during the reign of Kaiser Mo'll I and was subsequently misplaced into the care of a Babkhi scrap merchant from Ardashirshahr. The Repertory's claim to fame, deriving from the singular innovation, was the infamous performance of the Doghouse of Mors from which Royana Dolordotch walked out at the interval. 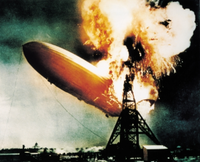 In spite of a world helium shortage... this hasn't happened yet.

Located three miles north east of the belt of swampland that serves as Mesior's landward boundary, so as to avoid any regrettable mishaps, the Lufthaven is Mesior's main airship or blimp docking terminal. The only company operating a service is Ryker Airships, which carries out twice weekly dispatches to Goldshire Hamlet and Kingsgate as well as a bespoke and luxury charter service for eccentric oligarchs in no particular hurry.

Quaint Ethnic and or Cultural Practices

In the Mesior and Aina Wards of Lunaris the preferred rite of marriage, as practised by the residents, is known as the Rite of the Rakshasa (Monsters). It is considered extraordinarily good luck to take a wife exhibiting the features to which the Rite of Pisaka applies - with combinations of said bridal characteristics being especially fortuitous. A wife who exhibits all four elements - specifically a girl of sub-functional IQ afflicted by florid insanity who spends her days in a drunken coma - would represent a nigh-on invincible talisman, warding off any and all dark forces one could wish to imagine and conferring effective immortality on her husband for the duration of her own lifetime.

The Lunatics of Mesior enjoy a certain amount of good-natured rivalry and banter with their fellow southern Benacian port. Jokes about Musicans get the most laughs at Mesior's stand-up comedy venues - and I'm reliably informed Musica's own comics give as good as they get when discussing Mesior.