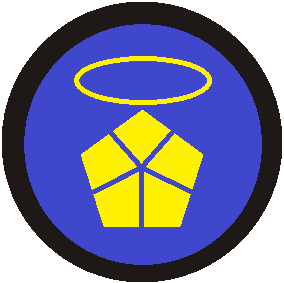 The family's colors, worn as a back patch.

The Saints Cycle Family is one of the communes forming the Community of Goetia. Saints formally organized as a Cycle Family in 1661.

The Saints CF has 265 full members and 5,912 auxiliary members. Its first father was John Babbit, a former President of the Conference of Cycle Families. Jeff Michaelson was elected as the new Father after John Babbit (Johan Johansson) was exposed as a saboteur from a nearby island. It has highway connections to Cliffbase CF and Gateway CF and has automatic honorary membership agreements with Horses CF, Eagles CF and Boars CF.

The Saints' colors represent a dismembered person, represented as a pentagon broken into five parts, with a halo on top. The colors blue and yellow are the colors of the The Saints' associated nomadic families, the Boars and Tigers.

In 1671, the cycle family was formally unregistered from the Conference of Cycle Families. Other families allowed limited numbers of former Saints to join as long as the former Saints had 2 or 3 sponsors to guarantee the good character of the applicant. Most former Saints have taken advantage of the Kalirion Fracture and have begun to return to Demonsfall to embrace the old ways.