Slavonjans are a Slavic, orthodox group, who for the most part live within the Southern region of Krasnarus in the District of Slavonje.

Slavonjan origins can be mainly traced back to Northwestern Apollonia. For years, they lived there in retaliative peace, until their persecution by the Confederation of Gralus. The tribes were ordered to preform a death march across the central Apollonian highlands, an act that will kill hundreds of thousands of men, women and children. After years of making little to no contact with any civilized state (accept for raiding), they finally reached Antica. For the most part, they were welcomed in to settle the south of the Sylvanian region, where the first major settlements, Slavonskigrad and Novi Vincennes (later merging to be known at Slavograd) would be located. Upon Antica's societal and cultural collapse, Slavonjan nationalism began to boil over. This culminated in the so called "United Slavonjan Provinces" being declared. This state soon quickly faded with the many Jingdaoese occupations of the area. Soon after, Krasnarus came to inhabit the area, who would then establish the District of Slavonje. 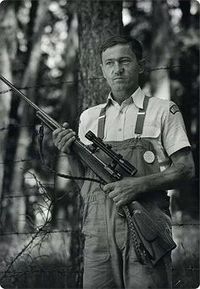 Slavonjans are well known for their hunting skills

The two most important customs for any Slavonjan are hunting and farming. Ever since their migration from the north, these two things have helped keep the culture alive and running. Today, these two things is how most Slavonjans spend their free time (granted they don't live in cities).

The Slavonjan religion dates back centuries. The Church of Slavonjans is the most modern version of the religion. The head of this church, like it almost always has been, is known as the Shadistska. The current holder of this position is Jakov Aleksić. The Texts from the High Lords of the Order of Slavonjans, the religion's highest texts, is still taught in many schools within Slavonje.

The Slavonjan Language (or New Slavonjan, if you consider Old Slavonjan an actual language or just incoherent mumbling) is heavily based off South Slavic languages such as Serbian, although most Slavonjan words to not bare resemblance to Serbian. While the language is predominantly written in a Latin script, many do write in Cyrillic.

As of a July 2018 census, there are a reported 1,252,846 Slavonjans residing within Krasnarus, along with am estimated 5-7 million living elsewere in the world.