From MicrasWiki
(Redirected from Red Elwynn)
Jump to navigationJump to search

The Elwynn is a prominent river system running through Eastern Benacia. It is the largest and longest river of Benacia, and is one of the longest rivers of Micras. The river consists of two major arms, the Blue Elwynn (the western arm) and the White Elwynn (the eastern arm), which meander slowly southwards until they flow together east of Shirekeep and become the Red Elwynn, which from that point on continues to meander slowly southwards to the Elwynn River Delta, passing the Gates of the Guttuli, where it flows into the Shire Sea. Numerous other tributaries feed the river system. Most of the length of the Elwynn and its tributaries are under the control and sovereignty of the Benacian Union, while the confluence of the Blue and Red Elwynns, as well as the mouth and delta of the combined Elwynn by Guttuli are under the control of Shireroth. 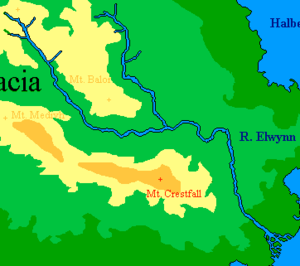 The Elwynn River as shown on the Physical Map of Micras.
Retrieved from "https://micras.org/wiki/index.php?title=Elwynn_(river)&oldid=257014"
Categories: