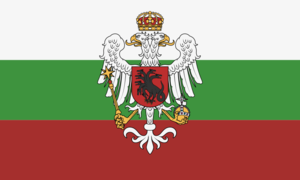 Flag of the Empire of Insulia

The Empire of Insulia is a Polonaise-speaking country on Micras, formed in the late 17th century after Norton as a union between Voxland and Westland, and known as the United State of Voxland and Westland until 1705 AN when it changed its name to its current name following the coronation of a unified ruler – Emperor Bazyli Izaak I. It is located in northern Apollonia on an island of its own, Voxland, previously known as Stormark's Vinland. Westland is reputedly located on Pollin, an off-world location about which - at present - nothing is known.