Empire of the Glorious Sun 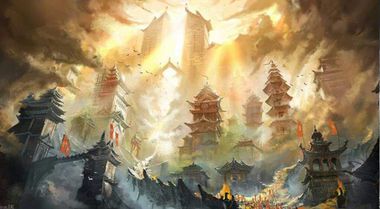 The Empire, which existed and flourished for over 1,000 years, had - according to legends - was the first ancient civilisation, with "houses as staircases to the Heavens".

The Empire of the Glorious Sun or Empire of Kagayaku was one of the oldest civilizations in the known world, which ruled the Antya region and claimed dominion over the western half of Apollonia. It was centred around the present-day Zhongji Province. The Empire grew and expanded between 1462bAN and 351bAN. Having started as humble shepherds, its people soon learnt to construct cities. It was still young when news arrived of the existence of the Khaz Modan Empire in the 12th century bAN, and also preceded the founding of the Istvanistani. The latter, however, successfully survived in becoming the longest continuous realm in existence, until its demise.

The empire flourished, but - according to the few remaining scriptures - the nation was weakened on land by a Great Evil, which it barely defeated at heavy cost. To regain a part of its power and prestige, its leaders launched a naval armada on the Khaz Modani (who were seen as a younger and weaker neighbour). The attack failed and led to the overthrow of the nation's government in the early 4th century bAN.

Scholars still differ in opinion concerning the demise of the Empire of the Glorious Sun: some argue that what had weakened the Empire, ultimately also destroyed the Khaz Modani. Old military reports during the reign of Kaiser Raynor I of Shireroth (79–169 AN) refer to a poisonous and mysterious mist, making travels to the destroyed Khaz Modani Empire impossible. These sources, however, date eight decades after the country's destruction. Zuxiang archives mention a sudden drop in trade with the Khaz Modani during the first century, but no reason (some speculate that the stable reign of Mang Emperor made imports less necessary). Therefore no real proof was given, and should probably be send to the realms of fiction.

In Jingdao, order was eventually restored when the Ying Emperor rose to prominence, united the Eight Tribes and established the Empire of the Pure Path.