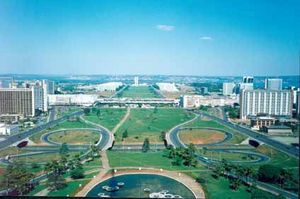 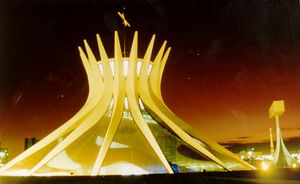 The Carras Cathedral at night.

Edgardia is the capital city of the province of Valenciennes. It is famous for its urban planning, daring architecture and rapid population growth.

Edgardia is located in the province of Valenciennes, in the southern mountanous region of the province.

The city was originally planned for 500,000 people, but the total population of Edgardia has merely reached 197,800 (2004 est.). This has posed some problems in regards to the city's expansion. Many of the grander construction plans have been put on hold.

Whilst most of the transportation within the city occurs via motorways and buses, a basic underground railway system, the Edgardia Metro, also provides transportation within the city and to the city of Franciscania. It also links Place du Aulinne, one of the city's largest shopping centres, with a terminals in the south and central areas of the city; nevertheless, it does not fully enter into the city's northern half. Aside from the underground railway and the more comprehensive bus-based public transportation system, there is also a railway connection with Franciscania, Geneva, Markion, Rennes and Poitou.

Edgardia is served by roads that link the city to all other regions of the country. It is also a national hub for air transport. It is served by Emperor Edgard II International Airport which currently has the third largest air traffic in the country. Most international flights, however, require connections through Geneva or Franciscania.

In education, Edgardia has the best indicators in the country. The literacy rate is 100%, according to the Human Development Index. The city has several universities. The most important public university is the University of Edgardia. As in the other Alexandrian cities, basic education (K-12) is public and run by the government. However, many of the best schools are privately owned and run.

As in the rest of the province, Edgardia has traditionally been a stronghold for the left, giving clear majorities to its candidates for most positions. However, despite Edgardia's stereotype as a bastion of rock-ribbed liberalism, the city tends to elect centrists and left-of-center candidates.

Edgardian voters adopted the Commission-Manager form of municipal government in 1931. Under this system, the political reponsibilities are divided between an elected City Commission and a hired full-time City Manager. Two part-time Commissioners are elected to four-year terms from each of three wards, with half of these seats up for election every two years. The part-time Mayor is elected every four years by the city at large, and serves as chair of the Commission, with a vote equal to that of a Commissioner. The races - held in odd-numbered years - are formally non-partisan, although the party and other political affiliations of candidates do sometimes come up during the campaign period. The Commission sets policy for the city, and is responsible for hiring the City Manager and other appointed officials.

Joseph Étampes was elected mayor of Edgardia after long-serving mayor Maurice de la Rue declined to run for re-election in 2003. De La Rue felt the position should be made full-time, but to avoid the question becoming a referendum on whether he should hold the job full-time, he announced that he would not run for re-election. The voters decided to keep the position part-time, and Étampes was elected.

The city of Franciscania reached a population of 2 million in 1906, making it the largest city in the Empire at the time. Because of poor sanitation, poor city administration and lousy urban design, the oulying parts of the city of Franciscania had become “shantytowns” breeding with disease, crime and pestilence. In an effort to bypass congested Franciscania, Prime Minister Jean-Paul Calonne proposed a bill to Parliament for the construction of a new capital city for the province of Franciscania in 1907. The Monarchists quickly were opposed to it, quoting that the money for the city would be better spent in fixing Franciscania. In response, Prime Minister Calonne touted the proposal as a “new start for the people of Franciscania” and called the city “the city for the masses”. It was then when the infant Social Democratic Party joined the cause, believing that the new city could be designed in order to ensure that all who lived within it had adequate housing, schooling, care and open spaces. Having received the endorsment of the smaller parties in Parliament to overwhelm the Monarchists, Prime Minister Jean-Paul Calonne ordered the construction of the city of Nova Era with an enormous price tag of 1 billion reales.

The bill that authorized the construction of the new city however, specified that all aspects of the contruction of the city, including the site where it was going to be built, would come under parliamentary scrutiny. This was done to gain some Monarchist votes for the bill – but it was here that the Monarchists delayed the construction of the city for years. The years came and went and Prime Minister Calonne was ousted in the elections of 1916 by the Social Democratic Party amidst a large campaign finance scandal by the Democrats. The new Prime Minister Jean Jaurès addressed an agenda of national reform that took up most of his term. Fighting with both the Monarchists and the Democrats over major aspects of the reform agenda consumed the Imperial government. Despite promising to get Nova Era out of parliamentary gridlock and scrutiny, he ignored it during his first term.

In 1919, Prime Minister Jean Jaurès was forced to resign after a no-confidence vote ousted his administration. In the ensuing election, the Monarchists won a clear majority, and the plan for Nova Era was passed to Prime Minister Albert Crècy.

Under Crècy, the Monarchists adopted the plan for the new city in a move to win votes with the left and to score sympathetic MPs within the Democratic and the Social Democratic parties. However, the Monarchists moved for the creation of the New City Commission to coordinate the planning and construction of the city to take the matter out of Parliament. They managed to fill the Commission with a massive Monarchist majority and left the Democrats and the Social Democrats with almost no representation in the Commission.

Campaigning under the slogan “let the city be built”, Albert Crècy was able to get the Monarchists to win a clear majority in Parliament and win the post of Prime Minister in 1930. Finally, in September 1930, the Emperor gave his assent to the final plan for the city of Edgardia.

The main urban planner was Francine Arras, a Fransicanian. Lucien Marmont du Carras, a Franciscanian as well, was the chief architect to most of the public buildings and Federico Hernandez, a Puerto Nuevan, worked on the city’s landscape. Edgardia was built in 3 years, from November 1930 to November 1933, when it was officially inaugurated.

According to legend, in 1883, the Asuncionian priest Jose Salas had a prophetic dream in which he described a futuristic city that roughly fitted Edgardia's location. Today, in Edgardia, one of the main cathedrals carries his name.

Francine Arras’s plan for the city was detailed and thorough. It stipulates which zones are to be residential and which are to be commercial. It limits where industries can settle, where certain buildings can be built and how tall those buildings can be etc.

Arras had insisted that Edgardia be shaped like a butterfly. However, most people think that the city is shaped like an aeroplane, instead.

The fuselage of the aeroplane contains the government buildings, skyscrapers, Imperial buildings and a futuristic cathedral, designed by Lucien Marmont du Carras. There is also a tall television tower, with spectacular views of the city and the man-made lake, Lac Imperiale.

The wings of the aeroplane are named the North Wing and South Wing. The avenue between the lake and the wings, called E2 Sud or E2 Nord, depending on which wing it’s on, has churches, schools and hospitals.

A wide, high-speed avenue, called the Nova Era, connects the two wings by passing under a central bus station, where the banking sector and hotel sector are located. The 100s and 300s addresses are on one side of the Nova Era, and 200s and 400s are on the other. There are residential areas on these streets made up of blocks of flats. The blocks are filled with three or six-storey buildings. Each has eleven buildings, identified by letter, with schools and churches in areas placed in between them. Commercial streets typically separate residential blocks from each other. Green space and trees make these areas very pleasant to inhabit, and residents of the city affirm that it is one of the best cities in which to raise children.

There is also a zoo near to the airport with animals native to the area. Recreational clubs and luxury homes surround the lake, and an enormous park, called the “Bois du Edgardia” (Forest of Edgardia), gives much-needed space for cycling, jogging and contact with nature.

One major criticism of Edgardia is that it was not designed on a pedestrian scale. Pedestrians were not taken much into consideration during the design. In the original plan there were no traffic lights - all cars travelled over overpasses and through tunnels to avoid intersecting traffic. The underground railroad is currently being expanded further to alleviate the problem.

Another criticism of Edgardia is the displacement of poor residents to far away satellite suburbs like Ichny, Lucienne and Girondia . Buses and a surface rapid transit system connect these cities to the centre. Inhabitants of these satellite towns live in conditions inferior to those of Edgardia. When one talks of Edgardia, these satellite cities are rarely taken into consideration. According to the original plan -- which Edgardia must follow -- the city is constantly under construction. [[