The aurora eagle, also called the aurora griffin, is a species of eagle native to the eastern part of Tapfer. Due to the dense foliage of the Great Hazel Woods, they are sometimes found walking along the forest floor to find a clearing to take flight from. These fleeting glimpses of the aurora eagle by native Yellow Islanders contributed to many myths, including one that it had the body of feline beast. Many people in southeastern Flaventia still refer to this species as a griffin. In other parts of Natopia where it is only seen hunting or migrating, it is usually called the white eagle. Due to its brilliant white plumage contrasting against the dark undergrowth of the forest, it appears to glow when observed under the sunlight as it moves across the forest floor.

During mating season, the eagle will return to the area it was born. It makes its nests in large Moon oak trees throughout the Great Hazel Woods. The aurora griffin is thus an important symbol of the duchy of Hazelwood and Flaventia. The aurora eagle mainly preys upon ocean fish, and its hunting and migration range reflects this diet. It generally hunts around the dense fishing locations off the coast of southern and eastern Klaasiya, northeast Thalassa and the Punkrock Isles, the islands of Nova Alrodria, and around Borders Bay. It can fly out to sea for days at time before returning to the coast.

If the current plans to extend the Great Hazel Woods are successful, the nesting range of the aurora eagle will be enlarged to reach the Elivian Peninsula, around present-day Anmutstadt. The Moon oak trees that are native to the Hazel Woods are among the only trees native to Yellow Island that can grow tall and sturdy enough to support the massive weight of the eagles' nests. Therefore the propagation of the oak must be successful before the range of the eagle will naturally expand. 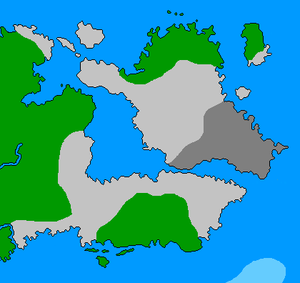