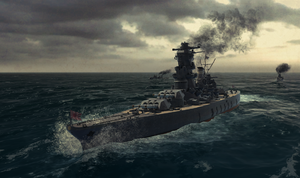 The Kattei-class battleship is always accompanied by other, smaller vessels.

The Kattei-class battleship (also referred to as Kattei Class) were Jingdaoese battleships named after the Kattei Emperor and designed and constructed by Sokoku Industries. It was first used by the Batavian Royal Navy, when Jinkeai acted as a successor state of Batavia within Jingdao. The vessels were the most powerful and heaviest armed battleships ever created in Jingdaoese service. Three were originally constructed for the Batavian Navy, but a fourth - the HLS Germania's Justice became a prestige projects and ended up surpassing its predecessors both in fire power and tonnage. After the end of Badaweian autonomy, the ships were integrated into the Imperial Jingdaoese Navy. The ships are priced at 138.491 million Kala per ship.

The ships were all built in the docks of Koningin Siserawerf. In 1678, most of the ships were extensively refitted with new technologies and cannons. Earlier design flaws (including the overuse of artillery, which effectively limited its firing power) were removed. 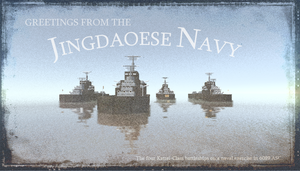 An old photo of the ships, before they were refitted.
Retrieved from "https://micras.org/wiki/index.php?title=Kattei-class_battleship&oldid=129252"
Categories: