The Gran Verionian referendum of 1683 was a nation-wide plebecite in Gran Verionia that was held in concurrence with the general election. The referendum saw an overwhelming number of voters voting against the incumbent Supreme Director Godolphin Viqh, who resigned immediately following the announcement of the result.

On the same day as the elections for the Cámara de Representantes, the people of Gran Verionia had the option to vote in an advisory referendum on the leadership of Supreme Director Godolphin Viqh. The referendum was originally meant to grant Viqh legitimacy, having succeeded to the Supreme Directorship following the death of Miqah Verion. Before the referendum, Viqh's rule was generally perceived as positive. The representative of the Soufi merchants was known as a skilled negotiator who managed to advance the goals of expansion and unification of the Verionian territories in a capable manner. As such, the referendum was considered a done deal by most pundits, especially since there was no viable alternative for Viqh. However, following the announcement of the referendum, this drastically changed. It started with a campaign of protest in Souf, instigated by the Hizbusoufi movement. As a member of the minority party in Souf, they argued, it was an affront to the Soufi people that Viqh was the Head of State of the Confederation. Initially, only some of Toroshi's Al-Wafd supported the call to vote "no" in the referendum. Most of Hizbusoufi's allies did not support the call to vote against Souf, leading to a split in the conservative political alliances.

Even though some questions had been raised about Viqh's position, the opposition forces were still dwarfed by the Unionist block, which had only increased after the Northern expansion. However, the tables turned dramatically for Viqh on the eve of the second Otoñomes, just a week before the general election. In a nationally broadcast congress, the Partido Unionista announced that it would support the "no" vote. The Partido Unionista, by far the largest party in the Congress, has the support of the majority of the Martino voters. In a speech, known as la puñalada (the backstab), Admiral Ernesto Calleja Escandon, the minister of the Armed Forces and a highly popular figure within the country, spoke against Viqh. In his speech, Calleja said that "A new chapter has opened for our great Confederation. The chapter of unity and glory. We can now close the chapter of foundation. We thank Señor Viqh for his leadership during the formation of our nation. Now, however, we must find someone who can take the purple-red-golden banner onward. It is my duty as a citizen and a servant of the nation to ask you, the people of Gran Verionia, to vote "No" in the referendum. It is the way forward for us all". The Partido Unionista's stance dramatically changed the game, and many of their supporters voted against Viqh, who lost the referendum with a staggering 69% against 26%, with 5% voting to abstain. 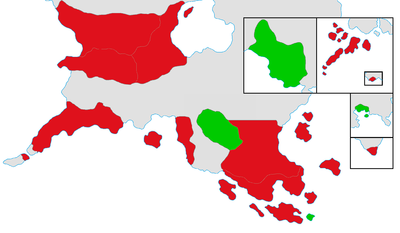 Results of the referendum by electoral constituency

Following the loss, Viqh announced his resignation as Supreme Director. It was reported that cheers erupted in the streets of Souf, but in the remainder of the country, scenes were less festive. The Partido Unionista, that had been a major player in the events, won the general election but immediately became embroiled in the new government crisis. Following Viqh's departure, Regina Verion announced that she would not support Calleja to become the new Supreme Director. Being the President of the Council of Government, Verion's statement caused a crisis in the government that was dominated by the PU.