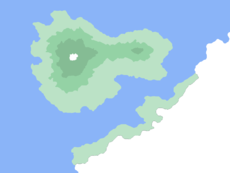 Situated in northwestern Cibola, the country lies between longtitudes 20° and 40° South and latitudes 180° and 160° West. The country covers land area of 623,232 km2 (240,631 mi2). Byalia doesn't border any MCS recognized country. The country consists of two landmasses - Osnotrovo Island, which constitutes 81.4% of total Byalic land, and the lands commonly referred to as Prekozemlye (Byalic: Прекоземлѥ, meaning Outlands), situated on the Cibolan mainland. Prekozemlye are incorporated in one Grand Duchy, Udesa, while Osnotrovo is organised into the Grand Duchy of Byalgorod. These two landmasses are divided by Strait of Byalia. Byalia is predominantly flat country, with midlands, highlands and mountain ranges situated in the Osnotrovo's centre. The highest point is Petoglav in Naiverh mountain range, with the elevation of 2,228 meters.

Byalia has a civil law, a codified legal system, however it is almost entirely influenced by theological elements coming from Nazarene Holy Scripture.

The country has three levels of judicial system: Basic Court, High Court and Supreme Court. Each court has its own responsibility, in accordance with the severity of crime. Compared to other countries, Byalia has a harsh, retributive criminal justice system.

As of 1695 AN, Byalia has established official diplomatic relations with 12 countries and USSO. Foreign affairs are the resposibility of Advisory of Diplomacy and Intelligence. Byalic foreign policy is focused on achieving mutual economic benefits through trade and cooperation between governments and protection of Nazarene ethnic groups in areas of interest.

The Byalic military is the highest authority in the country's defense system and in charge of deployment and preparation of the Armed Forces in peace and war. The commander-in-chief is the king, closely cooperating with Advisor of Defence. Grand Dukes lead field armies, and are responsible for their coordinations in accordance to the commands of the higher authority. Conscription is in force, therefore all men aged 18 and above are required to serve basic military service for one year. Women are serving on volunteer basis, with the only requirements being aged 18 or above and not being married.

Byalia is a feudal state, meaning that each administrative division is ruled by nobles of varying degrees of superiority. Byalia is divided into grand duchies, duchies, counties and lordships. As of 1690, there are two grand duchies and eight duchies.

Ethnically speaking, Byalia is considered a homogenous country, with the dominant ethnic group, Byalics, being 93.6% of the country's ethnic composition. The second largest ethnic group are Batavians (4.1%), followed by Alexandrians, constituting 2.2% of the population. Batavians and Alexandrians are concentrated in urban areas of the Grand Duchy of Udesa. Other ethnic groups make up 0.1% of population.

The official language throughout entire country is Byalic. However, due to significant Alexadrian and Batavian population in Grand Duchy of Udesa, the official language in this unit is, besides Byalic, Alexandrian and Batavian. Students have an option throughout whole education, besides learning the grammar and literature of their native language, to choose a mandatory second language, and a voluntary third language upon graduating the second. Usually, students choose the language that is the second most spoken in their local area and the languages that contribute to the foreign communication.

Religion plays a big role in Byalic society. According to the 1690 poll, 88.7% of the religious population practice their religion on daily basis, while additional 7.9% practice it on weekly basis. The most dominant religion in Byalia is Nazarene. There are three Nazarene denominations present in the country; Byalic subgroup Pravoslovni practice Orthodoxy, Katozi and Alexandrians practice Catholicism, while Pratesi are Protestant adherents. Despite the trend of each ethnic group choosing a dominant denomination, Batavians are the only notable ethnic group without an absolute majority, with Catholicism and Protestantism being almost equal in adherence. The patron saint of Byalia is Saint Pavlo, who is also the most recognized national symbol.