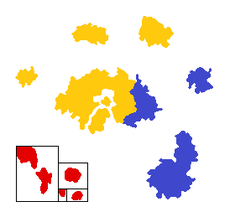 Map outlining the various proposals. The current Calbain lands are displayed in blue. The Ynysoedd Unedig expansion in yellow. The red lands are the former Calbain colonies, as well as Penguin Island which are included in some irredentist proposals.

The Ynysoedd Unedig (Istvanistani: United Islands) initiative is a proposal put forward by several Calbain politicians and activist, as well as some former Arcadian officials. The idea behind the initiative is to expand the Calbain state to all the Jasonian islands, which have fallen into ruin following the collapse of Arcadia.

The initiative currently has no majority in the Cynulliad Cenedlaethol because the official stance of the Nationalist faction is not to support the expansion, mainly for political reasons. For similar strategic reasons, the Realist faction, being ousted following the 1685 elections, strongly supports Ynysoedd Unedig. Kilkelly is already the largest stronghold of the Realists, and expansion towards the East is likely to expand the electorate of the Realists.

The original Calbain nation only comprised the Ynys y Calbain and Coastal Kilkelly and Armoria. For that reason, many nationalists or Calbain identitarianists, prefer to restrict the Calbain nation to its heartland. Although the population in the Western islands is estimated to be not more than one million (with many Arcadians having migrated to Francia and Batavia before the fall), the idea of expanding the group of ethnically non-Calbain citizens of Calbion is controversial.

In early 1686, Governor-General Evyn Drakeford said to "seriously consider" the initiative, but also made sure that any final proposal would need to be put in front of the people in a referendum, in addition to having a majority in the Assembly. He later rescinded the support saying that "there were significant issues" with an expansion.

Some radical irredentists also favour the inclusion of the former Calbain colonies, which are presently occupied by other nation, as well as the recapture of Penguin Island, a historically significant island that was given to Natopia by the Jingdaoese occupation government.

The plans for the United Islands proposal were put in the Western Expansion Bill of 1686, which was proposed by Nationalist rebel MC Jon Luwton. The bill provided for a large territorial increase and the annexation of the entire Jasonian archipelago. The plan did not include any of the former colonies, but instead claimed part of the Cibolan coast as the Talaith of Cybwlach. The plan also did not include a national referendum. Governor-General Drakeford did not support the Bill and called upon the Nationalist MC's to vote against the proposal. Since Calbion does not have a system of political party, but rather of independent representatives who align themselves in factions, he was unable to enforce discipline. Thirty-two Nationalists members rebelled and supported the bill, which was enough for a majority.

The vote triggered a political crisis when Governor-General Drakeford refused to recognise the result, deeming it impossible for the Assembly to decide this matter with a narrow margin, and without consulting the people. Having anticipated this government reaction, the Bill provided for the institution of the Committee for Western Expansion, which was to be an independent body appointed by the Cynnulliad. This Committee immediately proceeded with the expansion plans, and the new governmental arrangements that would be required, such as notifying the Micras Cartography Society who approved the expansion a month after the vote.