The Treaty of Amity and Cooperation between Sanama and Drak-Modan is an international treaty signed between the Democratic Federation of Sanama and the Bovic Kingdom of Drak-Modan. It was signed in the Drak-Modanian city of Twoggle in II.1674. The treaty establishes friendly relations within mutually recognized borders, visa-free travel, elements of free trade, as well as the transfer of five Drak-Modanian islands to Sanaman sovereignty.

The treaty was ratified by Sanama by a federal referendum in I.1674, where the Aye option won with 69 percent of the vote. The treaty was signed by the entire Federal Council as collective head of state.

The treaty was ratified by Drak-Modan by a 236 to 164 vote of the Fury on 23 Novaber 1674. The treaty was signed by Leopold Jorvikson, the King's Secretary for Foreign Affairs.

Text of the Treaty

Schedule to the Treaty 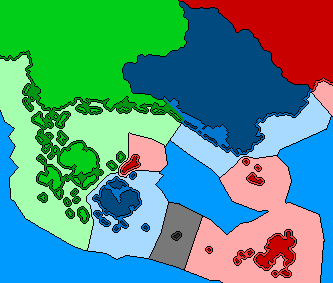