Terra (Hoennverse) (Hoennese: ‮地球‬, translit.: Chiku?), parallel dimension Planet Earth, not to be confused with an altogether more reprehensible parallel Earth, linked to the Micras via a rift in space and time into which the Hoennese have managed to install a tunnel like structure facilitating two-way traffic.

The existence of portals, dimensional rifts in space-time linking disparate worlds, have occurred not infrequently in the history of Micras and have facilitated the passage of humans between worlds on several occasions, including but not limited to the ill-fated attempt to settle the world of Giess[1]. Some have conjectured that these porous gaps in reality facilitated the spread of the human species across disparate worlds in the absence of practicable and reliable faster than light technology.

That this Terra is notably different to the Earth encountered in lore has cast doubt on the veracity of the source material for those other accounts but also raised the intriguing possibility that Micras and Terra exist both within a "multiverse" where the every action has a corresponding set of every possible alternative action, leading to a cascade of near infinite alternative realities coexisting in different dimensional planes. 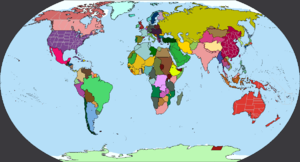 A map of the countries of Terra. Some colored areas refer to territories or colonies of countries, rather than sovereign states in their own right.