The Shiro-Lach Conflict (1665–1667 & 1671–1675 AN) had its origins in the unsuccessful secession of Lachmodan from the Imperial Republic and the travails of the Karalakh (Black Laq) in the service of Lichdom. This legacy of separatism would be amplified by the successes of the Inner Benacians in establishing their own polity and would result in the Shirerithians making a determined effort to bring their wayward small neighbour to heel. When the stresses of this conflict, combined with the impact of devastating pandemics, caused the Imperial Republic's ancient unity to finally fracture the conflict began anew with a renewed vigour and intensity as the Black and Red Laq vied with one-another to form a new tribal confederacy whilst die-hard Imperialists fought on in the service of new masters as all they had laboured to achieve crumbled to dust. This resurgence was not however destined to last and by 1674 the last semblance of Lach independence was trampled underfoot by the Slavegate Convention which saw Inner Benacia effectively partitioned between the Kalgachi-aligned Upland Confederation in the west, the Lachdolor Protectorate of the Black Legions in the east, and a rump neutral zone around Stonetree under the protection of corporate proxies of the Sovereign Confederation serving as buffer between the two divided halves of broken Lachdom. It might be considered an irony of history that the long struggle between the Lach and Shireroth would, at length, contribute greatly towards the humbling of both.

Northern Lachmodan, the heartland of the old Khanate of Karalakh was rife with rumours that the Imperial Mother was conspiring with the Sibyl of Bifrons to snatch the sacred Helm of Nela Khan Karalakhli from the Kurpla Fortress where it had been guarded by diligent monks since the crumbling of Lichdom to form a part of the coronation regalia for her son the Kaiser as he finally transitioned into adulthood and assumed the mantle of sovereign lord over the Benacian empire. It was rumoured this was all part of a plot to regain favour at court after a rash attempt to preempt the emancipation of the unfree by ordering a genocidal assault on the Froyalanish population had earned a stern rebuke from the Steward.

The Republic of Inner Benacia had been a problem for Shireroth for some time. Unlike the technologically and militarily formidable Kalgachi nation, the tribal confederacy which had gathered around the Dolmen in Stonetree had excited Shirerithian contempt from the very moment of its inception. In spite of this the success of the Inner Benacians in forming a multi-ethnic coalition to survive repeated Shirerithian incursions into the green, as well as holding their own in minor stand-offs with Kalgachia and Kasterburg, had excited nationalist sentiment amongst the Lach, Yehudi, and Tellian communities of Southern Benacia. The disparate ethnic groups, finding themselves under Imperial rule in Modan, Siyacha, and the Tellian Mandate, had already some experience of collective political action in the form of Coalition 1660, which had helped shake off Malarborian rule. However, by the time of the fractious Folksraad Election of 1665, support for the constitutional democratic route for securing autonomy was starting to ebb away in favour of a militant campaign to achieve full independence.

Shireroth's worst fear was that a coordinated campaign by its enemies, both foreign and domestic, would exploit the internal stresses of its hegemonic system.

One of the inciting factors contributing to the atmosphere of greater militancy came in 1664, on account of the activities of separatists operating in Inner Benacian territory with a measure of collusion from the authorities there. "Dawn Over Karamakhi" was the opening line of a verse of Laqi poetry made famous by the poet Medi Hadjimehmetov (nephew of the infamous secessionist Count of Lywind). The line was recited as an opening in a broadcast by a pirate radio station located in Inner Benacia on the 1st hour, of the first day, of the first month, of 1664. The effect of the broadcast was incendiary as it alluded to the final line of the same poem, which ended with "Our Liberty, Our Joy" (Enxu Estәkla, Enxu radsta), a historic call to arms amongst the Laqi.

With the active support of Red and Black Laqi volunteers from Inner Benacia, partisans in Lywall were able to establish, during the course of 1664 and 1665 three "liberated zones" along the border between the RIB and Shireroth. Two of these were in Lywall, with the third in Lachmeren. Concurrently another rebellion had broken out in Karalakh, although this was too far away for the RIB to do anything other than express sympathy.

The hope of the rebels was that, with the Shirerithian establishment distracted by the traditional occasion for fratricide that was their domestic electoral cycle, and the added complications of an attempted mutiny in the capital itself, the insurgencies in eastern and western Modan would be able to link up, isolating the various imperial and state garrisons, and force the Prince of Modan and the rulers in Shirekeep into serious negotiations for meaningful autonomy.

Unfortunately for them, instead the Prince of Modan opted to secure the support of the Raspur Pact for an effort to pressure the RIB into acceding to the Pact and accepting a garrison of Imperial troops to guarantee its future good behaviour, whilst simultaneously trying out the strategy of divide and conquer on the two insurgencies - sending twelve commissioners to negotiate in good faith with the Karalakh rebels whilst sending thirteen commissioners to Lywall with orders to mercilessly harry the Lach out of the country.

A war over a song

The final cause of open war between Shireroth and the RIB was so trivial as to be absurd. The periodical Microvision competition, an international musical contest open to the nations of Micras was held in late 1665 and it proved to be one of the more successful and competitive iterations of the contest. Shireroth had, unusually, taken the competition seriously and submitted a credible entry which in the rounds of international voting that followed was going toe to toe with Senya until at the last, with Inner Benacia being the last country to vote, Shireroth's entry had a five point lead and appeared all but guaranteed to be the host of the next competition with all the international prestige that would accrue accordingly. It was then taken as a calculated slap in the face that Inner Benacia awarded Shireroth's entrant nil points and gave five points exactly to Senya, depriving Shireroth of a victory that moments earlier had been all but assured. The response in Shirekeep and all across eastern Benacia, was unbridled outrage, resulting in a wave of protests and rioting. Unfortunately for Inner Benacia however amongst those Shirerithians having a fit of apoplexy over their viewscreens were the Kaiser and a psychologically unstable junior commander with access to the keys for controlling the launch of a short-range ballistic missile.

The official line from the Imperial Republic was that the launch of a Moraquine SRBM with a biological warhead as its payload towards Stonetree, the Inner Benacian capital, was the consequence of a psychotic episode on the part of a relatively junior officer who had previously been the subject of an investigation and disciplinary proceedings and ought not, accordingly, to have been left in sole charge of a strategic weapons system.[1] Set against this was the suspicion that the Imperial Forces had knowingly set a traumatised and unstable veteran of the Batavian Front at the controls of a missile launcher, with targeting coordinates preset and locked in, in the full and certain knowledge that sooner or later that such an individual would act upon the destructive impulses building up inside him.

Officially the officer in question was relieved of command pending a full investigation. In reality however the First Decurion was flown from Angularis to Shirekeep in secret and there received a hero's welcome from the Kaiser at Raynor's Keep.

The character of the Kaiser, Ayreon IV Kalirion, had an important bearing on how a controversy in popular culture managed to become a full-blown conflict. On this occasion, rather than being driven by ambitious or ideologically motivated officers on the ground as was often the case, the impetus for war in this instance came from the very top. The Kaiser had long considered the RIB a disgusting and backwards aberration that blemished the tidy perfection of his maps of Benacia.

The Kaiser, who had also become quite invested in the Microvision competition, especially as Shireroth appeared to be heading towards victory - leading him to prematurely begin making plans for hosting the competition - was enraged when Inner Benacia's blatantly political voting pattern brought his celebratory, some might say inebriated, mood to a crashing halt. For the Kaiser then this "insult" became something of a last straw and in that moment he discovered depths of rage that he never knew that he possessed. Had he been in the company of calmer minds, his concubine for instance, his anger might soon have dissipated. But, with only his favoured catamite, van Pijpervale, and a few servile courtiers for company around the viewscreen, fuelling his indignation by echoing his words back to him in encouragement, he resolved that the Inner Benacians would be made to comply with his will or suffer the consequences. The news of the Kaiser's desire soon reached the ears of the Steward and the Prince of Modan, and between them they agreed that the moment had come to make good on the long desired 'coordination' of the RIB's problematic foreign policy with Shireroth's interests.

Began 21.I.1666 (WiP)
06.VII.1666: Selected "eminent persons" from amongst the surviving clan leadership, gathered together by Imperial operatives at Ketekgorod received the Imperial Proclamation issued by Kaiser Ayreon IV Kalirion confirming their sovereignty and independence in conjunction with the Republic's accession to the Raspur Pact and the formalisation of the presence of the allied peacekeeping mission in the country.[2] 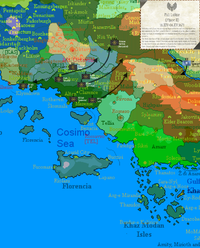 After the Kalirion Fracture the Raspur Pact was obliged to rely upon local forces, comprised mostly of defecting Imperials, to wage a campaign to recover the industrial facilities of Mishalan which were, for the Pact's planners, more critical to the sustainment of the alliance than the restoration of order in Shirekeep even would be.

The rise of the Ś°ecehe Yśehe (Black Brothers) in the aftermath of the Inner Benacian Revolution and the Kalirion Fracture, left them favourably positioned to benefit from the continent-wide collapse in Imperial authority. The Benacian Stabilisation Force, initially formed to meet this threat, had swiftly been knocked off course by events as popular uprisings swept the Imperial Republic. With its energies diverted into seeking to secure the bases, depots, and factories which had once made Shireroth the mainstay of the Raspur Pact, the cadre of ex-Imperial officers who had gathered in Merensk under the leadership of Constantine Loup were forced to make uncomfortable decisions - the first of which was on whether to adopt a new policy towards the Red Lach.