The Shirerithian erb is the currency and legal tender of the Imperial Republic of Shireroth, established since its inception. Since the Kalirion Fracture, its value has rapidly declined.

In 1691 AN, a new issuance of Erb was decreed, completely replacing the previous system of coinage. This new Erb would have its value fixed to that of wheat, with the value and distribution of grain now controlled through the Office of the Lord Lieutenant.

Coins would be minted entirely out of porcelain -- the precise formula kept as restricted as the minting dies to limit counterfeiters. S€1, S€2, S€5 coins are solid red, while S€10, S€20, and S€50 coins are red in the middle with a golden yellow edge pattern. 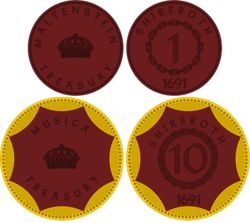 In the UGB the new iteration of the Shirerithian currency has become known as the "Mud Standard" in contrast to the perceived "Gold Standard" of the Benacian Sovereign (whose value is derived from the tribute payments of Kalgachia).

In the early 1600s, the Shirerithian economy saw severe deflation due to the hoarding of the ruling classes of money and assets. When Kaiser Ayreon III ascended the throne in 1620, there were only a few thousand erb in active circulation in Shireroth. The economy outside the utmost elite became based on bartering of assets and locally set fiat currencies. This system created untenable taxable income for local, state and imperial governments. Kaiser Ayreon III's reforms tried to decrease the value of the erb and increase its circulation. He initiated reforms that set annual budgets in the Landsraad, and financed them by wealth taxes on hoarded money in bank vaults across the empire. While favourably received by economists, the nobility disliked – though reluctantly agreed to – the reforms. Kaiser Verion, Ayreon III's successor in 1623, was similarly frustrated with the lack of financial stimulation in the stagnating economy of Shireroth. He did away with the annual budgets, trying to stimulate the economy in other ways, hoping instead that the fiat currencies would lead to something more tenable. Verion's view was that the erb was an outdated currency and needed to be replaced rather than reforms. When Verion abdicated a year later, in 1624, Kaiser Daniel III took up Ayreon III's economic views. In 1625, Kaiser Daniel's annual budget of imperial government was set at "only" 7,350 erbs, with the entire Ministry of Military Affairs budget set at 500 erbs. This budget was largely funded by wealth taxes on inactive bank accounts ("hoarders").

Subsequent kaisers were exasperated by the financial reforms and let the fiat currencies run amok across Shireroth. The erb was set to be the currency of wealth for the elite, and book-keeping and accounting became one of the most taxing (pardon the pun) professions in Shireroth.

During the reign of Kaiser Dominus, the Shirerithian economy was radically reformed. The value of the erb was devalued on the scale of 1 (new) erb = 4,000,000,000. Economic transactions outside the "erbage" were banned, and more appropriate taxes were set across the Shirerithian imperial republic, with imperial states largely funding their own activities and setting aside a tribute to fund the imperial government. This had huge implications on Shirerithian economy, with Shirerithian economy booming the next few years. By 1646, the GDP of over 25 trillion erb. The median wage in Elwynn at this point in time, for reference, was 22 erb per hour.

The value of the erb for the next 25 years was stable. The stability and strength of the Shirerithian economy saw it dominating most of the Benacian continent (see for example the Shirerithian customs area). However, the calamity caused by the assassination of Kaiser Ayreon IV in 1671, later known as the Kalirion Fracture, saw the erb's value plummet. Shireroth entered a negative spiral of hyperinflation that ended only in 1691 with the introduction of the wheat-based erb.