Ronnie Rona and the Aerosols

Ronnie Rona and the Aerosols is a Calbain rock band that originated in Pentyre in 1684. The group is one of the best-known exponents of Calpop, which is the post-1680 wave of Calbain rock and pop groups with a distinct sound based on Calbain folk singing. The group is immensely popular among the Calbain youth, who often imitate the hairstyle, clothing and facial hairgrowth of the band members. Conservative groups in Calbain society have warned against the provocative lyrics of the group, as well as the perceived sexual undertones in frontman Ronnie Rona's on-stage belly dancing routine. In Sankt Ludwigshafen the band has been banned by the Stadtparlement from performing or selling records because of the perceived demonic influence the music has on the youth.

The group was founded by Ronald Tyndale, a college drop-out from Pentyre, who spend most of his days hanging in the Admiral Benbow a shady pub that transformed into a nightclub during the weekend. Here, Tyndale met Tommy Mackenzie, a fourty-year-old carpenter and George Dau. They hang out for a while, listening to the bands performing in the bar. One Saturday evening in 1684, after a lot of beers, Tyndale decided that surely they would be better than the performers on stage. After some weeks of practice, during which George Dau managed to import an electrical guitar from Natopia, they performed for the first time at the Admiral Benbow. Two hours before the performance, Tyndale ran into James McGrath and Peter Davies, who he used to sing in a choir with as a kid. He asked them to join the band in their first performance as background singers. Tyndale later confessed that the band at this point did not yet have a name and, when asked to introduce the band, "just made something up that sounded funny".

The group's performance at the Admiral Benbow was a massive success and caused a revolution in Calbain music. Until that day, music in Calbion was either folk singing or choirs. However, the introduction of electrical instruments and some improvised percussion marked a new musical chapter. Their sound, quickly dubbed Calpop, was immediately imitated by other bands. The band at this point mostly performed covers, or heavily plagiarised foreign songs, but also had two original songs "Put a Paper Bag Over Your Pie Hole" and "Your Mother Didn't See Me, But I Wish She Did".

Tour of the Nation 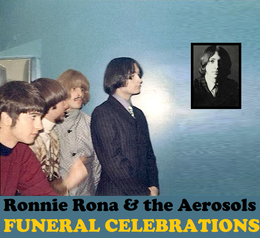 Funeral Celebrations is the most widely sold album in Calbion, and was a massive success for the band.

Immediately following their performance, Ben Bootstrap, a savvy music producer, signed the band for his small label "Mouth Mask Records". He captured on the popularity of the band by announcing a tour of the nation, which saw Ronnie Rona and the Aerosols perform in all cities and large towns in Calbion. Everywhere the group arrived, larger crowds awaited them. The popularity proved too much for Tommy Mackenzie, who managed to become addicted to both cocaine and alcohol in the span of two weeks and had to be kicked out of the band after exposing himself on stage. His position was filled by a 13-year-old boy named Michael Kean. The dismissal of Mackenzie was not the only incident that happened during the tour. The concert in Kilkelly sparked riots after it transpired that the massive crowd that came out for the band was too big for the venue booked. During the brawls that ensued, three people were hospitalised.

Following the tour, Ronnie Rona and the Aerosols were an established name in Calbion. Even the conservative Calbain were secretly awaiting the first album. At the end of 1684, the first album "Cough on Me, Cough on You" came out, immediately reaching number one in Calbion. Only four months later, the second album "Funeral Celebrations" came out, which to this day remained the most widely sold record in Calbion.