Reformed Catologism is a distinct branch of Catologism that originated in Batavia. It is currently the official state-sanctioned religion in the Kasterburg Republic, as well as a minority religion in Shireroth, Los Liberados and Caputia.

The religion of Catologism originated in Batavia in the early 15th century when it was introduced by Hieronymus Erasmus, a prophet, and quickly rose to become the dominant religion. It was also exported to Flanders. In the early days of Catologism, the dogma of the religion was rather flexible and often unclear. Central to the beliefs of the early Catologists was the story of Cato, who killed a wolf (in some stories a dog) and ascended to heaven, where he created Micras and became the greatest god of all. Catologism in these days recognised several gods who descend from Cato: Weckgut (a cosmical deity), Rhéjá (goddess of animal life), Polys (god of wealth), Charlotya (goddess of wisdom and poetry), Davilius (god of reincarnation and eternal life). 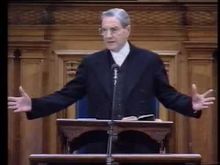 David Schot, Minister in Heereburgh and Chancellor of the Synod, delivering a sermon

With time, Catologism lost its meaning until it was nothing more than a collection of guidelines to which the majority of the Batavians adhered. This allowed the Jingdaoese Empire to hijack the religion for their own purposes, completely changing the religion to suit their own ideology. Later, a variant of Catologism was brought to Calbion, which was also significantly different from the original message of Catologism. This disenfranchised large parts of the original Catologian believers, mostly in Batavia, and the religion lost its important cultural status, especially after the political decline of the Batavian state. The Batavian Catologian Church (Continued) was the only representative of the original version of the religion left, but at the time of the end of the Kingdom, it only had about 20.000 adherents.

After the annexation of Batavia by Shireroth, a sense of national identity returned to some Batavians. This resulted in a political but also a religious awakening. It was in this period that Reformed Catologism was formulated, and the Reformed Catologian Church was established. It split from the Batavian Catologian Church in 1650, the large majority of religious Batavians followed the RCC, while the more secular members remained in the BCC, which has since all but ceased to exist. To Reformed Catologians, this is a sign of the righteousness of their decision to split from the main church.

Reformed Catologism has several core beliefs, which are summarised in the Eight Words of Truth, a credo that every member of the church adheres to. On Moonday, the holy day for believers, this credo is recited during service.

I, [name of the believer] believe the following Words to be True and Holy:

The Reformed Catologian Church teaches that there exist one godness (God - with a capital letter), who is called Cato. In him are the five other gods, who depict aspects of godness. Other crucial parts of Reformed Catologian dogma are a strong sense of determinism, as defined in the concept of Schicksal, as well as a central place of beer. Drinking of sacred beer is an important sacrament in the Church. 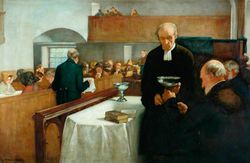 The Sacrament of Beer drinking taking place during a service

Church services are generally held on Moondays and sometimes on other Holy Days. Usually, the liturgy of the service is as follows:

Blessing and opening prayer. The Minister says the following: Our Trust and Expectation is from Cato, the one and only God, Creator and Keeper of all things. Blessed be thee, from above and peace and good will be upon ye.

Then, the congregation proceedes to sing a hymn, after which the Minister recites the Credo, with the congregation softly repeating the words. After this, another Hymn is sung, generally a hymn of praise.

Then, the Minister leads the congregation in Prayer, after which the third hymn is sung. Following the hymn, the sermon starts, often the sermon contains words of reflection and inspiration for the coming week.

Then, a hymn is sung, after which the congregation stands, forms a line and moves to the front to take part in the sacrament of beer drinking. Not all members take part in this ceremony, only those who feel that they have been blessed by Cato join the line.

A final hymn is sung following the sacrament, after which the Minister sends the congregation on its way with the following words May Cato guide you and keep you, may his presence be always with you and light your path for you, may the words of the Lord be with you and enligthen you so that your days may be peaceful and good.

The Reformed Catologian Church has 501 congregations in Kasterburg, 12 in Shireroth and 6 in the Union of Caputia, with a total of about 1.3 million members world wide. The congregations are divided into eight church provinces, each governed by an annual synod. A maritime congregation began in the late 1650s in order to cater for those Batavians who, through impressment or else by volunteering in order to escape life in their strife-worn homeland, found themselves living the perilous life of the Sea-Reavers. Reformed Catologism was introduced to Los Liberados by Kasterburger merchants of the Iron Company.