The center has a capacity of 3,150 in its fullest mode, making it one of the largest dedicated curling centers on Micras, following the Percy National Curling Center in Alexandretta. However, it is the largest center dedicated to the sport of icestock.

The center is operated by Royal Curling Meckelnburgh in the Coastal Division of the Far-East Regional Association. It is the main arena for icestock in the kingdom and the largest curling center in eastern Meckelnburgh, also used by the Fríða Curling & Icestock Club.

The center is most used for the regional Far-East bonspiels and the annual national championships, the Superspiels, including as the sole host of the Icestock Superspiel. It is also used by local clubs and events. 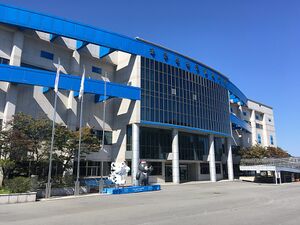 The main floor of the center is dedicated to curling. Four sheets can be accommodated in its largest spectator mode, while up to six sheets for smaller audiences in regional events with more teams. Beneath the main floor is an ice rink, to accommodate local skaters, hockey players and other icesports.