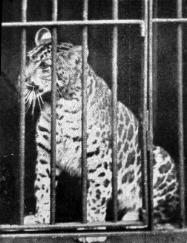 The Jingdaoese valleytiger (Panthera jingdaoesis) is a feline species that originates in south western Apollonia, where it lives almost exclusively in the territory of the Jingdaoese Empire. One feral group of the animals lives west of the Eventide Islands in Keltia, and another on the Great Plains to the north-west of Elam. It was the result of hybridisation experiments by Unit 666 in 1681. Ancestors of the animal are, possibly among others, tigers from Xianbei (Kitanus Fields), and a bijeko-lisea-nas from Corum. Goal of the project was to breed wild animals that are harmless to ethnic Jingdaoese citizens, but see others as prey. Results were moderately successful, with the animal still targeting minority groups such as Rivorians and Batavians. A group of 58 animals was released into the wild after funding for the project stopped in 1685. According to estimations, the population has since risen to 75 individual animals in the Tanlin and Zijinlin national parks. It is not sure how many are outside these territories, as the animals are considered to be mostly harmless and are not monitored. They are known to travel far and have been sighted close to the border with Senya and Floria, but no reports of sightings have been received from these nations prior to 1686 when the Florian Committee for Civil Contingency Planning posted notices offering a significant cash reward for every animal slain whose carcass was brought to the Committee for verification.

The Jingdaoese valleytiger is an apex predator, its primary prey is dependent on the presence of ethnic Jingdaoese people in the vicinity. If these are around, it will focus on ungulates, such as goats and donkeys. It is a solitary but social predator, that share territories and will cooperate when they feel threatened. The animals can reach a length of 350cm and a weight of 250kg. The Jingdaoese valley tiger is extremely fast, regularly reaching speeds of up to 80 km/h in sprints. The animal can swim, and will cross wide rivers.

Valley tigers in the Hexarchy

As the valley tigers are unlikely to attack ethnic Jingdaoese people, some of them have been caught and sold as pets. Highly notable was a case where poachers illegally sold ten young valley tigers to an immigrant family of Ralgonese origin living on the Eventide Islands. Since the family was forced to keep them in cages to escape oversight from the strict authorities on the islands (where exotic pets of any type are banned), the tigers were similarly poorly trained. Thus, as the valley tigers became adults, their genetic programming kicked in and they slew the entire family, before the authorities could intervene. Instead of permitting all of the tigers to escape into the vast Keltian forest to the west, a small number out of this were instead repurposed as animals to use in the few gladiatorial arenas in both the Eventide Islands and Elam. One particular group of around 50 Jingdaoese valleytigers that escaped into the Great Forest in western Keltia is especially infamous. They are known to actively seek out humans for prey, and prefer them over any other species -- likely because the valley tigers have learned to hunt by slaying their adoptive family. Authorities are said to tolerate the presence of the tigers as they deter runaways and other unwelcome migrants from becoming squatters on the precious little land reserved for future human settlement.

Attempts have been made to train the tigers, most of them in the Hexarchy. This has proven to be rather difficult. As cubs, the animals can be trained and will tolerate humans around them. When the animal becomes mature, its genetic programming kicks in and it sees its former master as a prey. Hunters have tried to use the tigers to drive the natives' prey from their cover in the heavily forested portions of their domain. Recapturing the tigers turns out to be quite difficult however, and they tend to turn on the hunters themselves. However, the natives rarely complain openly of this tendency. If anything else, the continued (attempted) use of these beasts as hunting animals, in the words of many of its natives to the north, proves the bravery of those with the resolve to use them, and the resourcefulness to survive the attempt.