Cult of the Sacred Detonation 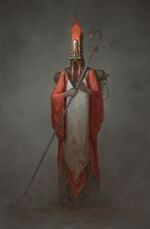 Cultists typically incorporate respirators and radiation-shielding into their vestments, particularly in areas affected by the Scouring. 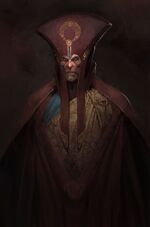 Those cultists charged with diplomatic or political duties often forgo protective measures, as communication with laymen can be difficult otherwise.

The Cult of the Sacred Detonation (informally referred to as Boomism) is a branch of Cedrism which focuses, to the point of monomania, on explosions and their natural beauty. Originated in the Audentior Independent Nation under the auspices of Lukedu and was subsequently absorbed into the mythos of the Imperial Republic. One consequence of this is that one of the more prominent religious festivals is known, prosaically, as La Fiesta de la Boom.

Antiquarians have previously claimed that Cedrism was an offshoot religion of Boomism. In 1643, Kaiser Dominus informed all concerned that they are quite in error regarding this assumption and that, most importantly, they are never to repeat it, on pain of his marked disapproval towards them.

During the 1703 Council of Negrixnaht, it was agreed that four bailiwicks and three cities, devastated by the Scouring, would be given over to the jurisdiction of the cult's scattered ecclesiarchy as a quasi-Governorate in return for their commitment upholding certain customs endemic to their new lands. These sites have since begun to see a coalescence of Boomist pilgrims and opportunistic cult priests into what has been collectively dubbed the See of the Radiant Revelation under the guidance of the titular body which has come to be recognized as the de facto governing authority in the ruined lands assigned to them.

The Cult of the Sacred Detonation believes in a pantheon of powerful aspects of Agni within who control the forces of nature and hold sway over the fate of humanity. The most prominent deities include:

Together, these deities form the unique sub-pantheon of the Cult of the Sacred Detonation, and are worshiped and venerated by its followers. Through their devotion and sacrifice, the followers of the Cult hope to gain the favor of these powerful deities and receive their blessings.

The cult is led by a council of high priests and priestesses, who are responsible for making decisions and guiding the direction of the cult.

The council operates by majority vote, with each member having one vote and the presiding Grand Priest having the additional power of casting five votes in cases where the council is unable to reach a decision. In order to reach a decision, the council members engage in discussion and debate, and they try to come to an agreement that is in the best interests of the cult and its followers.

Below the council are the regular priests and priestesses, who serve in the cult's temples and conduct religious ceremonies and rituals. These individuals are responsible for providing spiritual guidance and support to the cult's followers, and for ensuring that the cult's teachings and practices are upheld.

The Cult also has a special group of priests who serve as observers in the Mithui, the union-state's commission for the Panopticon. These priests are responsible for monitoring and analyzing the sensitive materials that are sent to the Mithui, and for determining whether they contain information that could be harmful to the Cult or its beliefs.

Finally, at the bottom of the hierarchy are the lay followers of the cult, who are not members of the clergy but who still follow the cult's beliefs and practices. These individuals are the majority of the cult's members, and they are responsible for supporting the cult through their offerings and sacrifices.

In the decade following the Cult's ascent to power, it saw a marked increase in popularity in the area surrounding the Sovereign Confederation, where the Mithui was courting Cult leadership in hopes of a political alliance with them and their growing flock. One symptom of this popularity was the admission of three Cult priests as observers in the Mithui during it's tenure as the body commissioned for the Panopticon of the union-state. As they do not believe in bureaucracy, the access the elected priests suddenly had to potentially sensitive materials regarding all subjects of the Union gave them pause. Ultimately it was decided that Panopticon Reports sent to the would be burned en-mass and combed through later to allow the combustive will to be known; this led to later reports being printed on paper containing a high dosage of asbestos fiber. Those whose files remain intact are deemed suspect and are investigated further. Those not vindicated in these investigations are all invariably sentenced to community service in the radiant pool at the mouth of the Kingsweep, where teams in mobile extraction rigs process the polluted radioactive wastewater. A rather unique but effective interrogation practice the cult employs in these investigations involved the inquisitor threatening to explode themselves if the defending party refused to confess. The success of these methods is owed to their fanatical consistency in honoring such threats.