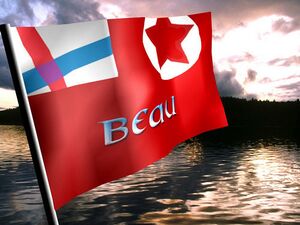 The Grand Principality of Beaugium, known in short as Beaugium, is a micronation first dreamed up around 27th December 2005 and then founded on the 2nd January 2006. Beaugium is a Lovely Sector micronation. It is a welcoming place for any traveller, and a must see on Micras

Birth of a Nation

In the 11th Century, a group of Celtic tribes coalesced around the town of Arnesis, near the centre of what is now modern Beaugium. They became known as the Beaugies (a perhaps unfortunate name), a fearsome tribe famous for painting themselves in a yellow-green, slimy substance to frighten off their enemies. The country of Beaugium was founded under Arcturius the Great in 1370. Arcturius was an infamous warlord who committed many acts of barbarism in his early years, as he fought to gain power, but once his nation was united, he mellowed into a wise leader, instigating a democratic parliament well before most other European countries. Peace reigned for many years in Beaugium, until the 28-Years War (which actually lasted for 29 years, but due to a clerical error, no-one actually noticed it had finished until about 12 months later). This was fought between Beaugium and neighbouring Spexinia (the forerunner of modern-day Spexico) and was eventually resolved when it became apparent that it had all started as a result of a huge linguistic misunderstanding (the Spexican for “hello” sounding very similar to the Beaugique for “Go away tentacle-breath, you are invading my mother’s favourite Quince Orchard”).

Beaugium in the Middle Ages

From the late 14 to the late 17th Century, Beaugium went through a period of great stability and prosperity. It became a sea-faring nation, despite having no coast (other than that of the inland sea along which the Lovely Beach resides). Ships set sail to the four corners and even the three-and-a-bit edges of the Earth (following the early discovery of fractals by Beaugian mathematician Franco Beau-Newton, which was subsequently forgotten). Cibola was discovered by Beaugian Explorer Beaugio Legrande in 1488, but he got lost on the way back when he started partaking of the substance the natives had been found to be smoking, which later turned out to be rather old kippers. Science and art both underwent a renaissance in Beaugium in the 16th and 17th Centuries, with many discoveries commonly attributed to other countries actually occurring in Beaugium and being stolen by foreign spies. This led to a great sense of mistrust of other nations by Beaugians, and they became insular and secretive. This is the reason why, until so very recently, the very existence of Beaugium has been totally eradicated from the history books

A pact between a group of small countries led to the eventual emergence of the Nation of Lovely, which came into existence in July 2005. Beaugium was initially fully integrated and lost it’s identity, until an upsurge of Beaugian Nationalism led to the Declaration of Existence of Beaugium. Reigning Monarch PAsTA took notice of Lovely's Law - 'Be Good' and abolished all archaic Beauigan laws to instate two. Be Good, and then Be Nice around six months later (this became known as the first amendmant). Some would say that this is unnecessary, since if the main Law is abided with, being nice will naturally follow, but experience of six months of “Be Good” has proved otherwise…Some consider the 1st Amendment an oppressive device by which hugs and over-niceness will be imposed against the will of the People, but it is in fact intended merely to prevent extreme nastiness – Beaugium is an extremely inclusive Nation which is vehemently opposed to all forms of bigotry, sexism, racism and violence. We are tolerant of most views with the exceptions of these.

The Royal Line of Accession

There has been an unbroken line of accession to the Beaugian Throne since Arcturius The Great founded the Nation in 1370. All bear the surname Beau.

2nd in line to the throne - High Prince Babs, had known all along about his Beaugian heritage, and it was he who led the upsurge of nationalism on January 2nd 2006. He had also, inadvertandly, discovered Beau Magic. He had participated in a recwar with the Lovely armed forces, and was amazed to find himself self-healing. He would rarely get hurt as a High Commander, but paper cuts and pin pricks would seal over instantly. When the family were reunited, he shown them all how to use the Beau Magic, but they never grasped it as he did. To this day, his palace is an enchated fortress and Babs retains the metamorphagus prowess.

On June 6th 2005, Babs once more made a descion for his country. He started up the Beaugian forums which were well recieved by Beaugian and Lovelite alike. Now they are the most posted upon currently active forum in micronations with 230,000 posts, exceeding Lovely's current forum, the MCS and even MNN

When Beaugium resigned it's MCS membership in March 2007, Novatinia put forward a claim for a section of Sypyr, Beaugium's previous homeland. When Beaugium returned in May, Beaugium and Novatainia discussed options and Babs deemed it necessary to move Beaugium. Beaugium now inhabits South Island and its surrounding islands Liberty Is, Equality Is, Fraternity Is. And Aplha, Beta, Delta and Gamma Isles, known as a group as the Omaga Isles.

Beaugium is bordered only by the CIS who hold a small territory on South Island. Sea borders exist with Lovely, Stormark and Antica's colony, New Brannum

South Island is mainly low-lying around the coast but get higher the further towards the centre you get. All of the surrounding islands are flat.