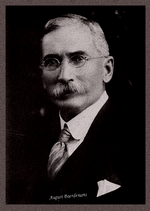 August Baerdemans (1610 - ...) was the first Vryheer of the Transbataafsche Vrystaat. As lieutenant-general, he helped establish and develop the Vrije Weermacht, the military force of his homeland. He was a devoted catologian and proponent of Batavian supremacy above that of other ethnic groups. His foreign views were limited to seeking recognition for his republic, while also staying strictly neutral. He viewed his southern brethren, the Kasterburgers, as favourable partners, while the Kalgachians were seen as "useful, but not favoured, allies".

He supported the nationalist projects of the first administrations to strengthen unity, like with the construction of the Weerstandsmonument in Nackholm. In the 1680's he was appointed as Field Marshal of the Batavian Armed Forces.