Jacobo Castrigo Álvarez (1634-1676) was a Batavian and Liberadosan businessman and politician who served as the President of the National Liberation Council (Junta de Liberación Nacional) and Head of State of Los Liberados and as Foreign Minister of Batavia. In Batavia, he held the noble titles Duke of Transingel and Lord of Montfort.

Castrigo was born in March 1634 as the eldest son of Jacobus II Castrigo, and as such is the grandson of the former King of Castrigia. He spent his youth in Batavia, where his family had set up. At age 18, he left for Shireroth where he started studying Law and Business. During this time, Castrigo became known as a frequent partygoer. After dropping out from university, his father made him join the Shirerithian Armed Forces for a year. In 1659, Castrigo joined the Iron Company as a merchant.

At the Iron Company, Castrigo quickly made promotion, culminating in his appointment to the Governing Board in 1665. In the same year, he was named head of mercantile operations for Central Micras. In 1668, Castrigo organised and executed the liberación of the islands currently known as Los Liberados. He subsequently went on to serve as the first Governor of the islands.

Holding a Batavian citizenship, Castrigo was appointed as Minister of Foreign Affairs in the Vinandy cabinet. An independent, Castrigo oversaw the Land treaty with Shireroth and was instrumental in establishing the Batavian Confederation. Following the Coronation of King Arkadius IV, Castrigo was named Minister of State for his contributions to the nation. 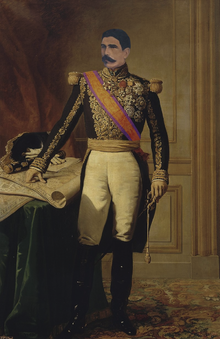 Jacobo Castrigo Álvarez in Batavian court uniform during the coronation of Arkadius IV (1669 AN).

Head of State of Los Liberados

In 1669, Los Liberados was granted independence from Kasterburg. Castrigo was named first President of the National Liberation Council (Junta de Liberación Nacional), the head of state. Castrigo resides in the Palacio Presidencial in Puerto Arcadio, the capital city of Los Liberados. Following the establishment of a democratically elected legislature, Castrigo became the leader of the Junta-allied Partido de Liberación Nacional, which subsequently won the 1669 elections.

Castrigo's presidency saw the establishment of a strong central government with autocratic elements, rapid economic development due to close cooperation with the Iron Company and expansion of the country to the North. The influence of Castrigo on the development of the young republic can hardly be overstated, as he was personally concerned with the creation of the bureaucratic institutions of the nation. Although regarded as an anti-democratic ruler, Castrigo enjoyed a massive popularity with the Liberadosan people.

In 1676, Jacobo Castrigo Alvarez died in a plane crash. His death sparked a period of mourning in Los Liberados. His successor, President Rodrigo Calderon Mendez, proceded to govern in the style of Castrigo, and further increased centralisation. Castrigo's remains were found five days after the crash and flewn to Puerto Arcadio. Here, he was buried in the Catodral de Nuestro Salvador, a ceremony that was watched by millions among the globe.