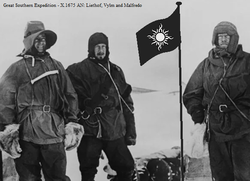 The Great Southern Expedition was an antarctic expedition which started in X.1675 and resulted in the establishment of two settlements on the Micran South Pole. The Great Southern Expedition occured in two waves. The first initial expedition to the South Pole was a venture by the Iron Company and had the goal of sampling and testing the uranium resources of the antarctic continents. A second expedition included scientific research and military developments on the South Pole. The second expedition saw the foundation of the settlements of Port Regina and the Kaiser Verion Extraction Base, as well as the establishment of the Antarctic Colony under the flag of the Verionist Republic.

The idea for the Great Southern Expedition emerged in early 1675. The Verionist Republic had emered as a stable nation, with a fastly developing economy, especially following the annexation of Monty Crisco. The increase in industry and population meant that demands for energy soared. The Iron Company provided the majority of energy for the Verionist Republic, with the two main sources being the North Batavian Gas Field, exploited by the Company, and the nuclear power stations of Kasterburg. Due to the scarcity of uranium on the Banacian Continent, the Atoomkracht power stations of Kasterburg were unable to adequately provide for the increased demands from the Verionist Republic. Thus, the Iron Company decided to build three new nuclear power stations. Two in Monty Crisco, and one in Elsenar.

To extract the much-needed uranium, the Board of Governors looked at the Micras South Pole. The sparcely populated, barren and frozen continents of the antarctic are home to a large source of uranium. Enough to fulfil the requirements of the Iron Company and the Verionist Republic.

For the initial expedition, a small team was assembled. This team included Pojt Vylm, a legendary Elwynnese (Raikothan) mountaineer and explorer, who devoted a large part of his life to mapping the North Pole circle. The team also included Iron Militia Captain Haza Milasevic as well as expedition leader Norbert Liethof. The party left the port of Skyla on 2.X.1675, and reached the ruins of Craiss twelve days later. Here, they established control station I, which would later develop in the settlement of Port Regina.

The team reached the South Pole on 22.X.1675, having faced a snowstorm that suspended radio communication for several days. After arrival, the team conducted several tests to see if the uranium was suitable for extraction. The results were tested in a mobile labaratory, and came back positive. This paved the way for further exploration and the second expedition.

Members of the First Expedition 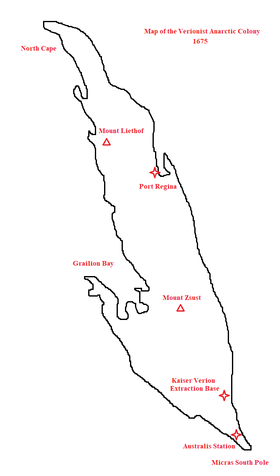 Map of the Verionist Antarctic Colony, the map is noticably different from the highly distorted representation on the Micras official map.

The Flag of the Verionist Antarctic Colony

Immidiately following the news of the positive results, the second and much larger expedition set sail for the antarctic. This expedition included scientists, military personel (both Iron Militia and Verionist Benacian Army) but also sarpenters, builders and supply personel. Several ice transportation vehicles, developed by Wendor Motors, were also shipped across the ocean and greatly aided the expedition teams. This second expedition established the Kaiser Verion Extraction Centre, and built a transport route to Port Regina.