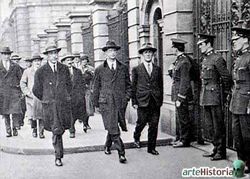 Lord Jean Michel Leclerc des Montagnes, born in Santos Laguna de los Mares del Suroeste, a colony of The Republic of Talamthom, on 4th April 1984. Despite the prominence of Spanish culture on the island, his father was originally from Alexandria before emigrating thus explaining Leclerc's Alexandrian-French name.

Leclerc, after studying at the University of Talamthom, decided to persue a career in politics in the land of his father. In 2004 he decided to leave the tiny Santos Laguna and head across Los Mares del Suoeste (The South-East Seas) to The Empire of the Alexandrians.

Leclerc's politics were extremely left-leaning upon his arrival. Having been a strong supporter of the Communist Party of Talamthom whilst at university, he decided to stand as an Independent Leftist candidate for the Imperial Parliament. Although many of the more conservative members of the Parliament didn't agree with his outlook, many respected his level-headed approach to Alexandrian Political life.

At his politically most powerful Leclerc, counted the Emperor as a close friend, despite obvious political differences at the time, and held the position of Interior Minister, was the Member of Parliament from Valenciennes and was involved in the secret defense council. His loyalty was rewarded by the Emperor when he given the title Lord des Montagnes.

Leaving Alexandria and the Return

In late 2005, Leclerc decided to leave Alexandria due to the poor health of two close family members in Santos Laguna. He has, since his departure, kept a keen eye on developments in Alexandria and had never ruled out a return to the country he once called home.