Fréo-Fighting is a test of practical martial skills featuring amateurs and professionals throughout Nova England. It involves a number of bouts against a continuously replaced opponent with little or no rest in between.

Fréo-Fights are generally organised between martial arts schools and the local council and have become a firm fixture as a community event. A Fréo-Fight will often see a formal fighting stage set up, alongside ale tents, exhibitions and general market stalls. Prior to the commencement of the event, all the lead fighters and their schools are paraded through the area, often following a procession of brass bands and flags.

Prior the commencement of each fight, their schools master or coach will present the lead fighter and announce that they wish to be tested and the weapons that will be used in that fight. The fight will then commence with each challenger renewed following the receipt of a ‘kill’ hit or landing at least three ‘kill’ hits to the lead fighter. The weapons used are blunted and rounded to prevent injury, however additional safety equipment in terms of masks, padded jackets and gloves is rarely used. Common weapons used during these fights include quarterstaffs, long and short Saexs, staff and shield, Shirerithian cudgels and unarmed bouts largely based around Fréo-Fýst.

Challengers to the lead fighter are often from rival schools, local militias and even the spectating crowd itself. The fights then end when the lead fighter has fought a set number of bouts or is unable to continue due to exhaustion or injury. Following this the lead fighter’s master will announce that their student has been tested and will award them with a tankard of ale. This is often the first of many as lead fighters following their fight will be expected to supply their challengers with ale throughout the rest of the day/evening.

The Skargness Summer Fréo-Fights is the longest running Fréo-Fights event in Nova England. First established in 983AJ soon after the re-emergence of the Faedertellus these events which take place across the summer season attract fighters and spectators from across the National Redoubt Region.

The Travercraig Challenge is a weeklong Fréo-Fight event in the village of Travercraig. During this week the normal functions of the village practically cease as locals and visitors take part in the event. The event has also supported a burgeoning tourist trade within the village due to its location near the Nova English/Mercurian border.

The Jospoole Games are noted for the quirkiness of the Fréo-Fights that take place. Much of the event takes place on barges and piers around the Jospoole Lake. While exhibitions include ship-to-ship fights, fought in traditional Nova English dress and longboats. 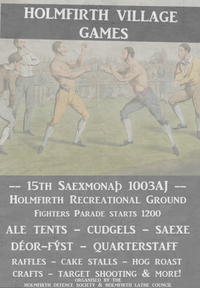