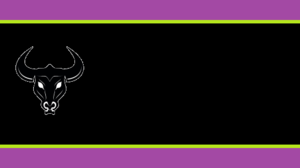 The Flag of Drak-Modan represents the Bovic Kingdom of Drak-Modan. It was first adopted during the republican interregnum in 1679. The flag is directly influenced by the design of the second Flag of Natopia due to the adoption of fundamental lindstromism in the republic. It uses the colors of the Benacian Bovic Church, yellow-green and red-violet, which are complementary colors and as the most distinct complementary pair to distinguish from the Dozan Bovic Church's color scheme of orange and blue.

The first kingdom of Drak-Modan used the Flag of the Shirerithian Imperial State of Modan & Malarboria, which was based on the county flag of Lach Modan. 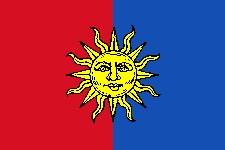