Puerto Arcadio is the capital and largest city of the Republic of Los Liberados. The city was established in 1667 as a trading post by the Iron Company and has witnessed a rapid expansion due to the incorporation of the two nearby towns of Swanville and Santa Lucia. Aside from being the largest city in Los Liberados with regard to population, it is also the seat of government, with both the Palacio Presidencial and the government complex, the Casa del Pueblo being located in the city. The most prominent Liberadosan companies and businesses have their headquarters in the Distrito Comercial.

Puerto Arcadio literally translates to Port Arkadius, and is named after the Batavian king Arkadius II, who ruled Batavia during its glory days. The figure of Arkadius II has been integrated in Liberadosan culture. Many Liberadosan have some kind of Batavian heritage, which was reinforced when the Iron Company established a trading post on the islands, and opened the markets of Los Liberados to the world. The Iron Company tradesmen were mainly of Kasterburger Batavian origin, and thus an interesting synergy emerged. Following the liberación and the independence of the Republic, the city, which had grown into the largest and wealthiest on the islands, became the capital city of Los Liberados. 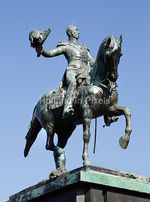 Puerto Arcadio is governed by an appointed major. Current major, Juan Contudor Chavéz, is a member of the Partido de Liberación Nacional, the political party associated with the governing Junta of Los Liberados.