The Antya River runs through Shireroth's Duchy of Kildare in south Apollonia. Its source is at Lake Christoph, and its mouth is at Carama Bay. Its widest 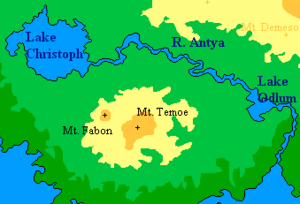 The Antya Riveras as shown on the Physical Map of Micras.

point is Lake Odlum. The Antya River is the "cradle of civilization" of Micras; most of the world's earliest countries grew up along its banks. According to old information compiled by the Union of Apollo States, the upper courses of the river are hard to navigate because of steep waterfalls, but the lower areas near Audentior are much more commercially useful.

The name Antya comes from the Sanskrit word meaning "ultimate", and was first used for the Antya Micronational Union of Orion in August 2000. The Antya River existed on the pre-MCS Union of Apollo States map, and has been one of the largest rivers on the MCS Map ever since Series One.