Greenuk was started on November 16, 2006 by Geoff after watching the BBC series "How to start your own country". It started with four of Geoff's friends as citizens but it's expanding. In late 2007, King Geoff decided to leave his country to another person. There was a short time of people applying and then King Lewis was chosen.

Geoff started Greenuk with help from his friends. He hecame the Minister of HEADS at Amoria, then went on to get a Lovely LUv and a MSc LUv. He abdicated in September 2007.

King Lewis (notable for being the Hamperor of Hamland, and current king of Monovia) took over power in late September 2007. He sought to keep Greenuk alive and yet link it to his other micronations. As he could not be head of state of 2 micronations, he seeked to unite Greenuk in a commonwealth. 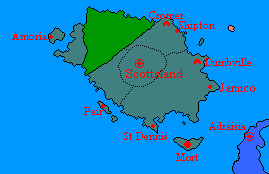 Greenuk is a member state of the United Commonwealth.