Planned route of the new expressway, with Goetia's existing borders.

The Gateway Western Expressway is a limited-access road project in Goetia with financing, logistics, other planning concerns provided by the SATCo-managed government of Waffel Plains. The stated goal of the new expressway will be to directly connect the Gateway commune to the existing interchange between the Troglonauts' and Gladius' communes and to avoid the circuitous route that goes through the Crophaulers' commune. The project was begun in 1687 with a planned completion date set for 3rd quarter 1689.

The main component of the project involves a 132km-long section of mountainous terrain that requires several road cuts and tunnels to make the expressway an acceptable grade for transport of heavy materials.

The project was born out of the agreement between Goetia and Natopia that granted SATCo a monopoly on resource extraction of gold and marble in Goetic land. However, transit time from Gladius through Crophaulers, Gateway, Gathering Place, then Luix-Satyria often delayed shipments of important building materials required by SATCo and other Natopian concerns. Goetic leaders lacked the knowledge, logistics, and basic infrastructure to make new routes and instead relied on a natural gap in the Cibolan mountain range. 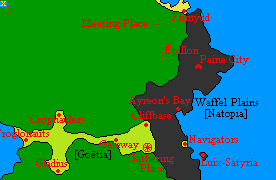