From MicrasWiki
(Redirected from Eagle Throne)
Jump to navigationJump to search 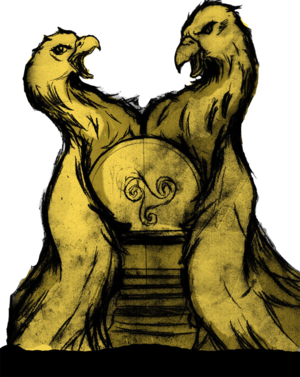 The Eagle Throne, made out of South Dalmacijan gold.

In a metonymic sense, the "Eagle Throne" also refers rhetorically to the head of state and the institution of the House of Myksos in its role as ruling dynasty itself. The throne itself was made at the request of Taodosius Myksos, first Dutch of the Myksos household to rule Kildare. The throne itself eventually became a symbol of power over the whole Republic when it became clear that Trajan Myksos and his successors would proceed ruling even after the proclamation of the Republic.

In 1632 AN (January 2016), with the democratisation of the Jingdaoese Empire (after a terrible nuclear destruction in its cities derailed the society), the Eagle Throne regained a certain status (as it had survived the nuclear disaster) and was used once more, but this time as throne of the Emperor of Jingdao (the first Emperor to use it was the Zettai Emperor). The Throne remained a strong symbol of imperial dominance in all affairs and is well guarded within the Imperial Palace of Daocheng.