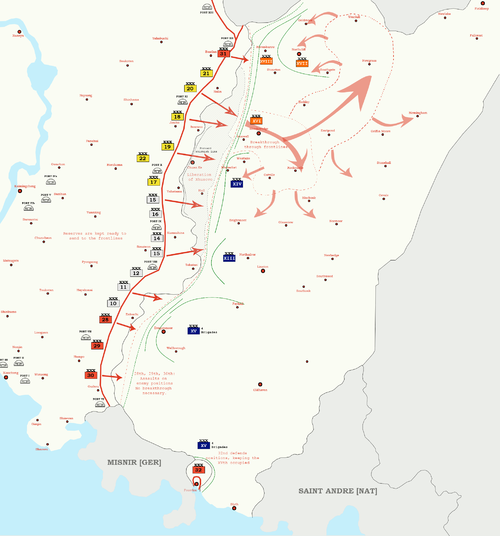 The Yao Plan was the name given to the battle plan made by Jiangjun Tzao Yao, who acted as Chief of the Jingdaoese Imperial Headquarters. The original plan (Yao Plan I) entailed an invasion through and of Xhusovo, if no agreement could be reached with the local authorities. The idea behind the push and concentration of manpower in this region was that it lacked the trenches and fortresses that had been constructed by the Florians in 310 and 311 EGA. It therefore was called the Xhusovo Gap by both parties. 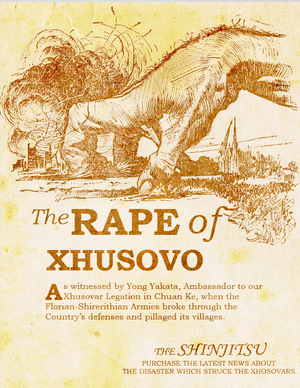 The so-called Rape of Xhusovo had great propaganda value in the Jingdaoese press. The invasion of Xhusovo angered the nation's population more than the assassination of a foreign kind, who was far away.

During the War of Lost Brothers, the Florian-Shirerithian army anticipated such an attack an pre-emptively invaded Xhusovo [1]. The invasion forces, with a strength of around 25,698 men, overwhelmed the poorly trained and demoralised Xhusovars within twelve days.

Both the public and general staff were angered by the invasion of the neutral and small country, but both for very different reasons. In the first days of the conflict which would soon become the War of Lost Brothers, the public opinion in Jingdao - and mainly with Kildarian groups - towards a war with the Florians was at best unenthusiastic. The invasion convinced many that Shireroth was - indeed, like Jingdaoese newspapers had been telling for daors - making preparations to eventually invade Jingdao's mainland. In short, the public opinion was swayed towards a very aggressive policy regarding the Florians. This pressured Diwang Zhang San to propose an ultimatum in the Imperial Yuan which he didn't support himself and found unacceptable and disgraceful for any self-respecting country.

In the meantime, the anger of the general staff was directed towards the loss of opportunity. Princess Yuling - a proponent of a swift counter-attack - was however stopped by Tzao Yao, whom preferred to use the affair to seek support among all layers of the population. He proposed a slightly modified battle plan, this time with the goal to liberate the poor Xhusovars from foreign aggression. Knowing well that any defences in the region would be inferior to those constructed on the border, he proceeded planning.