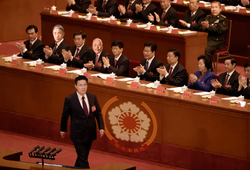 The First Congress of the Gong Suweiai since its reformation after the Post-Chidao Troubles. The legislature consisted for a large part of prominent Jing politicians and officers with ties to Hon Ben Erasmus' Gang of Four.

The Xinshi Decrees were a number of important political Heavenly Decrees during the early 1700's. While officially written and passed by the Xinshi Emperor, there was little doubt - even among contemporaries - that Hon Ben Erasmus was the true mastermind behind them. Hon, supported by some of the Great Jing's most important and influential officers had formed his Gang of Four to influence the Heavenly Court.

The Decrees, while not directly contradicting the Conference of Apollo, mostly went against its spirit and ideals. Making use of the messy political situation, the Gang pushed for a centralisation of power into the Jingdaoese Community. The Community, while merely meant as a cultural entity, was transformed into an institution which could heavily influence all states' policies within its sphere of influence.

Limitations concerning those who could become candidates during state elections were introduced. Either one had to have served in the Armed Forces or Tegong, or had to have successfully passed the imperial examinations. This limited the possibility of non-Jing to actively participate.