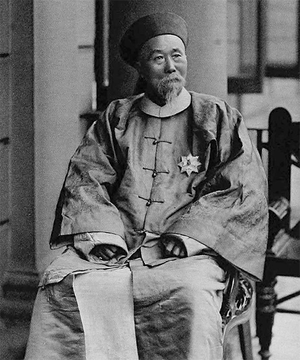 Wu Pei was seen as one of the people who kept the peace in Jinkeai Province while the country was in total disarray.

Wu Pei (1622 AN - ...) was a Jingdaoese bureaucrat and politician from Jinkeai Province. His family belonged to a long line of local bureaucrats. The arrival of the Great Jing in Apollonia brought changes which were even felt in regions they did not yet even annex. Eventually, the Jing established direct control over the Jinkeai region during the early 17th century and the Pei family was jingdaofied.

Wu himself became Vice-Roy of Jinkeai in 1679 AN and acted as one of the proponents of more civil control over local government. A power struggle between the Army, Navy and himself were inevitable and almost led to his assassination in 1687 AN. The assassination was covered up, but Wu's further defiance led to a crackdown on extremist officers within the province.

He was one of the advisors of the Chidao Emperor after the 1690 recession, which established a provincial assembly in the provinces. The assembly of Jinkeai was led by Wu Pei himself and would eventually play a key role in establishing the League of United Jingdaoese Provinces during the Post-Chidao Troubles. Uncertain about the whereabouts of Chidao (despite numerous claims of His ascension to Heaven) and wariness towards Jin San, who he saw as too extremist, he proclaimed neutrality in the upcoming conflict. His influence assured that most of the local Field Armies retreated back to their barracks.

At the start of 1696 AN, Wu Pei was widely recognised as most important government figure in the east. His successes, mostly meagre but nonetheless victories, kept the leftists from the Second Xianbei Defiance Movement and the imperialists of the Seishi Clique at bay.