Vyktory's primary institute of higher education, the Royal University of Jamestown operates campuses across the nation.

Much of the water which flows down the Knight River to the east of Vyktory is converted to hydroelectric power by the VykHydro Energy Corporation, the nation's largest producer of electricity.

Logo of Sales Association of Tradingcards for the Young and Rebellious Limited.

Distributor of trading cards and organizer of trading card game tournaments. Their only IP is Sporting Heroes! but the company also distributes Magic: The Gathering, Pokemon TCG and Vanguard, among other TCGs. Plurality owned by Peter Kingsley, with minor shareholders being Drag0n Entertainment Limited and Tabletop Compendium Limited. The company is also dabbling in using its cardstock for other purposes, such as playing cards and business cards. 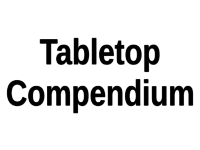 Distributor of tabletop role playing games as well as some board games. No IPs of their own, but they distribute products as varied as Dungeons and Dragons, Monopoly and Pandemic. Majority owned by Alan Myrtle, who bought most of the shares from the public.